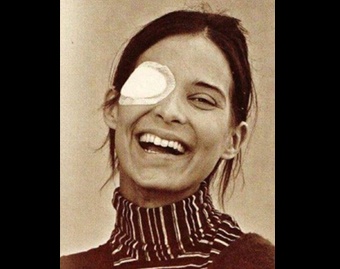 In a culture where women are bombarded with the message that convenience and worldly achievement are tantamount — even overriding their children’s right to life — it is refreshing to see women who have defied the norm. Even more impressive is women who radiate happiness in so doing. Chiara Corbella, whose last name means “beautiful heart,” did not achieve anything that so-called “progressive” women find worthy of mention. She married young after dating one man for many years. She didn’t have a big successful career. She just wanted to be a wife and mother. But even her attempts at motherhood were a failure by worldly standards; her first two children died right after birth. Ultimately, in 2012, she also died — a death that could likely have been prevented if she had notrefused to undergo her own treatments for aggressive cancer while she was pregnant, since they could have harmed her child. Despite the curve balls life threw at her, Chiara is remembered for her joy.

Chiara Corbella and her husband, Enrico.
Image from religionenlibertad.com

Born in the early 80’s, Chiara was a native of Italy. She married her husband, Enrico, in 2008 after six years of dating. Their relationship, though, was sometimes turbulent, and the couple fought often. But ultimately Chiara and Enrico knew that, despite their struggles, they could both give what it took to make a joyful and strong marriage – and they did. Shortly after they were married, Chiara found out she was pregnant for the first time. Early in the pregnancy, however, ultrasounds revealed that their baby had ancephaly. Chiara and Enrico, with what has been described by their friends as a supernatural degree of acceptance and joy, took the news in stride and knew that they would carry the baby to term and love her until she died. The baby, Maria, was born in early June, 2009, and died in her parents’ arms less than one hour after birth.

After burying their first child, Chiara became pregnant again a few months later. But she learned during the pregnancy that her second baby would also die. Little Davide was born almost exactly one year after his sister, and, like her, he died within minutes of birth. He was also wrapped up in the love of his parents when he passed. Chiara and Enrico demonstrated the same strength and joy following the loss of Davide, and did not shy away from the possibility of subsequent pregnancies.

There was no correlation whatsoever between the malformations suffered by their son and the condition that had caused his sister to die. Neither of their conditions had been genetic, either; both children died of unrelated and non-inherited causes. So when the couple became pregnant for a third time, they retained the same joy and anticipation they had felt at the discovery of their first two pregnancies. This time, no terminal conditions were diagnosed in the baby. But one was diagnosed in the mother.

Chiara found out about halfway into that third pregnancy that she had cancer. Doctors discovered that a persistent sore on Chiara’s tongue was actually a malignant tumor. Chiara declined any cancer treatment that would potentially harm her unborn son. She did have surgery on her tongue during the pregnancy, and this resulted in physical agony for her, since she would not take strong painkillers due to their potential danger to the baby. But beyond the surgery, Chiara postponed radiation until after the baby’s birth.

Baby Francesco was induced two weeks prior to his due date, and Chiara had a second surgery. This did not eradicate her cancer, however, and so she then turned to the long-postponed radiation therapy. During treatment, Chiara enjoyed the time she had left with her husband and son, and lived life as normally as possible. Due to her selfless sacrifice of postponing radiation for the sake of her son, Chiara was beyond cure by the time he was born, however. She was quickly deteriorating. Marie Meaney describes this period of Chiara’s life for Crisis Magazine:

On April 4, 2012, they heard the final verdict: Chiara was terminally ill. She didn’t want to know how much time she had left, so that she could live fully in the present. They moved to her parents’ home in the countryside to have some peace and quiet; Enrico stopped working, and it was in a way their happiest time. It was also a period of great grace. They received Pope Benedict’s benediction during a Wednesday audience and briefly told him their story.

What is most extraordinary about Chiara’s life may be how, in the midst of an otherwise normal and unremarkable existence, she profoundly embraced the most difficult trials. Chiara stared sorrow and struggle in the face and said, you will not have the final word. Through the loss of her first two children, and ultimately of her own life, Chiara Corbella witnessed in her own perfect way to the fact that life is precious for as long or as briefly as it lasts, and she knew that her job was simply to make the most of it without interfering with its natural course from conception to natural death.