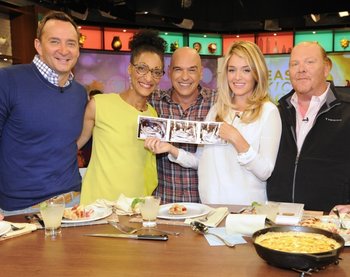 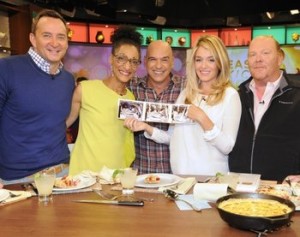 ABC’s The Chew co-host Daphne Oz surprised an enthusiastic audience and cast today on the show when she announced that she is pregnant with her first child. As the cast recapped each of their summers, Oz told co-hosts and the audience about how she and her husband had celebrated their third wedding anniversary over the summer break, and showed pictures from the vacation. Then she said nonchalantly, “And I actually have one other picture to show you guys, another fun picture from the summer… something else that happened,” before pulling out ultrasound photos to reveal news of her pregnancy, which was a surprise even to her fellow hosts (Michael Symon, Clinton Kelly, Mario Batali, and Carla Hall). You can view the video clip here – it’s sure to make you smile.

When I got this [the set of ultrasound pictures] it was the weirdest feeling. Because it looks like a little human and its like you fall in love with this little person who you’ve never met.

The announcement was met by exuberant outbursts from each cast member. Michael Symon said he had known of the pregnancy when Oz refused coffee that morning, and Carla Hall said that the news was going to make her cry. Oz responded, saying, “You can’t do this to me, I cry about everything now, really you can’t do this to me!” Mario Batali, sarcastic as always, pointed out that he thought the baby looked like him.