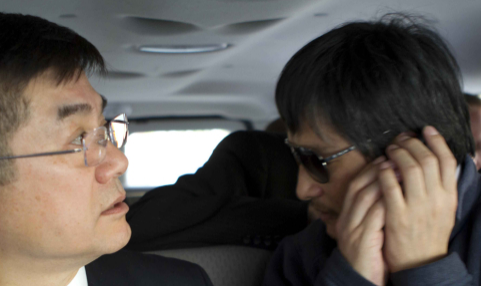 There’s been a flurry of updates on the situation of Chinese pro-life activist Chen Guangcheng since his story hit the mainstream this week.

There’s been a flurry of updates on the situation of Chinese pro-life activist Chen Guangcheng since I last posted about him on Monday.

First, the Women’s Rights Without Frontiers group shared with their support the inside story of Chen’s heroic escape – most incredibly, he managed all of this despite his blindness:

How did Chen escape?  The Chinese Communist Party clamped down on him as hard as it could.  His house was surrounded by 66 guards working in three shifts – 22 guards every eight hours.  His village was sealed off by yet more guards.  His phone, computer and television were confiscated.  He was completely shut off from the outside world.  Plus he was sick and injured from all the beatings.

According to Peirong, Chen spent months on his back, pretending to be near death, so that his guards would relax their vigilance.  Then on April 22, with exquisite timing, he scaled a wall and ran for his life, taking several wrong turns and falling into a river because of his blindness.  Peirong drove 20 hours to meet Chen and fooled the village guards into letting her in.  She disguised herself as a courier.  Then she drove Chen another eight hours – still wet from his fall in the river – to safety in Beijing.  Their plan was so masterfully executed that the authorities did not realize Chen was gone for four days.

Once authorities discovered that Chen was missing, the reprisals began.  The Chinese Communist Party violently detained Chen’s older brother and nephew, and his wife, children and mother are at risk as well.

All of this came after Chen had been imprisoned by Chinese government officials for nearly seven years. One of the things Chen has been able to do since escaping was give evidence about China’s widespread practice of brutal forced abortions.

And outrageous as it sounds, the Chinese are demanding an apology from the United States for harboring Chen!

At this point, it appears that Chen has complied with Chinese demands and is now in a Chinese hospital. But it appears that being left without the protection of the U.S. Embassy is already not working out well, and he may have even been misled by American officials:

Chen, 40, said he never asked to leave China or for asylum in the U.S. and said American officials reassured him they would accompany him out of the embassy. At the hospital, Chen was reunited with his wife, his daughter and a son he hasn’t seen in at least two years. But after they got to his room in Chaoyang Hospital, he said no U.S. officials stayed behind and that the family is now scared and wants to leave the country.

“The embassy told me that they would have someone accompany me the whole time,” he said. “But today when I got to the ward, I found that there was not a single embassy official here, and so I was very unsatisfied. I felt they did not tell me the truth on this issue.” [AP]

It’s clear from all of this that we need to keep the pressure up on Secretary of State Hillary Clinton and the entire Obama administration to ensure the continued safety of Chen and his family, as they promised they would do. The petition I mentioned yesterday is now approaching 3,000 signatures (their original goal was 1,000 – my goal is 5,000!). You can also sign the petition via your Facebook profile (instead of filling out all the forms).

Please continue to pray for Chen, monitor his situation, and think of creative things you can do to publicly express solidarity with and support for him and his family! They are still not out of danger, but they are safest as long as the Chinese government knows we are watching how they treat him!

Like millions of other Americans, I have followed the story of Chen Guangcheng with admiration for his courage and concern for his safety and that of his family.  I am deeply disturbed by the most recent report by the Associated Press, which suggests Chen Guangcheng was pressured to leave the U.S. embassy against his will amid flimsy promises and possible threats of harm to his family. In such a situation, the United States has an obligation to stand with the oppressed, not with the oppressor.  Having handed Chen Guangcheng back over to the Chinese government, the Obama administration is responsible for ensuring his safety.  While our economic relationship with China is important and vital to the future of people in both countries, the United States has an obligation to use its engagement with China to press for reforms in China’s human rights practices, particularly with respect to the reprehensible “one-child” policy.

In a just-released interview with CNN, Chen was asked, “What has your wife told you after you escaped?”

(My wife) was tied to a chair by police for two days. Then they carried sticks to our home, threatening to beat her to death. Now they have moved into the house — eating at our table and using our stuff. Our home is teeming with security — on the roof and in the yard. They have installed seven surveillance cameras inside the house and built electric fences around the yard.