(Pregnancy Help News) Chemical abortion in the U.S. continued to rise in frequency in 2021 according to a new report, opening the door further for exploitation and risk to women.

Chemical abortions expanded in 2021, Operation Rescue reports, with a rise in the number of first trimester abortion facilities to meet the increased demand.

“Overall, two factors had the most impact on abortion trends in 2021,” said Troy Newman, president of Operation Rescue. “Those were the passage of the Texas Heartbeat Bill, which prohibits abortions after about six weeks of pregnancy, and the new pro-abortion policies of the current administration, which include the relaxing of Federal regulations on how abortion pills are dispensed.”

Newman was referencing the recent repeal of part of the FDA’s safety standards for chemical abortion drugs.

Commenting on the second report focused on chemical abortion gains, Operation Rescue Senior Vice President Cheryl Sullenger said, “Operation Rescue’s abortion facility survey identified some disturbing trends, including the increased use of telemedicine and the now-permanent policy that allows abortion pills to be delivered through the mail.”

“This policy change is expected to open the floodgates in 2022 to opportunistic and unaccountable pop-up businesses distributing abortion drugs through the mail,” Sullenger said. “With abortion pills four times more likely to result in complications than surgical abortions, there will likely be an uptick in emergency room visits.” 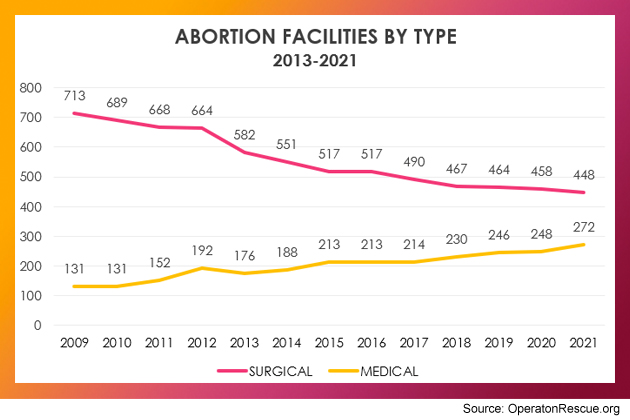 Newman said the data from the group’s survey confirms that the current administration “is driving changes within the Abortion Cartel that are putting the lives of women and their babies at greater risk.”