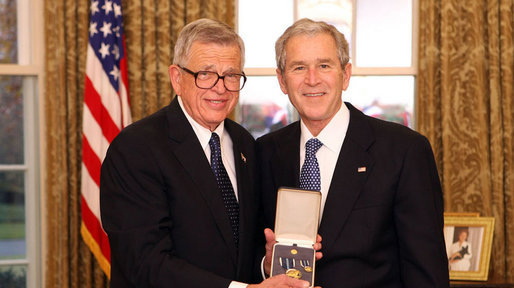 Charles W. “Chuck” Colson could be best-known for his participation in the Watergate scandal during the Nixon administration. According to the Christian Post, Slate magazine writer David Plotz once described Colson as being President Nixon’s “hatchet man,” or “evil genius.” But Chuck Colson isn’t best-known for his failures. On the contrary, he is known for the amazing change that took place in his life in 1973. It was in that year, while facing arrest for his involvement in the Watergate scandal, that a friend handed Colson a copy of the classic C.S. Lewis book Mere Christianity. Reading Lewis’ book led Colson to what Michelle A. Vu of the Christian Post describes as a “dramatic conversion.” The Rev. Samuel Rodriguez of the National Hispanic Christian Leadership Conference tweeted that “Chuck Colson’s journey speaks to a man who fell into grace rather than falling from it.”

After becoming a Christian, Colson started his non-profit Prison Fellowship. According to The Chuck Colson Center for Christian Worldview, “Colson maintained that the greatest joy in life for him was to see those ‘living monuments’ to God’s grace: Prisoners transformed by the love of Jesus Christ. And thanks to the work of Colson and Prison Fellowship Volunteers across the country, there are thousands of those living monuments among us today.”

Chuck Colson was also a pro-life advocate. In fact, Colson wrote a column in recent weeks for Life News, in which he talked about the pro-life film October Baby. Colson wrote:

Many of our laws in this country are built upon the fantasy that birth, not existence, bestows a fetus with personhood. If you kill a newborn in the United States, as infamous Philadelphia abortionist Kermit Gosnell did for decades, you go to jail. But just minutes prior, the same act of killing can be legal. This is nonsense. I’m praying that articles from ethicists like Giubilini and Minerva will wake people up to the reality of what they are justifying. If enough people start to get it, then it won’t matter what a few academics elites think. Legal abortion will crumble before the outcry of decent, moral people, just as it did when early Christians dared to speak out against infanticide and abortion in their time.

According to the Chuck Colson Center for Christian Worldview, Charles W. “Chuck” Colson died at 3:12pm on Saturday due to complications resulting from a brain hemorrhage. The Evangelical Christian leader was 80 years old.

“One of the most wonderful things about being a Christian is that I don’t ever get up in the morning and wonder if what I do matters. I live every day to the fullest because I can live it through Christ and I know no matter what I do today, I’m going to do something to advance the kingdom of God.” -Charles Colson