On Wednesday evening of the 2012 DNC, Cecile Richards, current president of Planned Parenthood, was given the opportunity to spew her straw men and claim to speak for all women in America. The speech includes the typical Cecile Richards rhetoric: women have come so far, those evil people over there want to take us backwards and oppress women, they want to end cancer screenings and access to birth control, and so on. 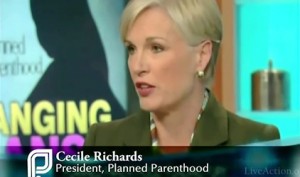 Two years ago, when John Boehner, Paul Ryan, Todd Akin and the Tea Party took control of the House of Representatives, they promised to create jobs and jump-start the economy. But, instead, on day one, they came after women’s health. And they haven’t let up since. They voted to end cancer screenings and well-woman visits for five million women, end funding for birth control at Planned Parenthood, and for good measure, they even tried to redefine rape. And now, Mitt Romney is campaigning to get rid of Planned Parenthood and overturn Roe v. Wade. This year women learned that if we aren’t at the table, we’re on the menu.

Of course Todd Akin had to be mentioned (as if John Boehner and Paul Ryan are going about redefining rape); the speech wouldn’t be a speech without it. As if Paul Ryan and Co. are really out to end cancer screenings. That’s really where the controversy is. They want women to die of cancer.

I find it deeply anti-woman that Cecile Richards seems to suggest that at the heart of women’s rights is birth control.

Nearly 100 years ago, when Planned Parenthood was founded, birth control was illegal. And as a result, few women had the opportunity to finish school. We weren’t even expected to live past the age 50. Times have changed. Today, we are mothers, and we are teachers and scientists and accountants and members of the armed forces.

She’s saying that it’s Planned Parenthood and birth control that have enabled women to have opportunities in life. This is the typical sexist rhetoric of Planned Parenthood. It’s saying that women wouldn’t be able to be all those things today without a pill that fixes their fertility problem. To them, mandated universal hormonal contraption coverage is essential to women’s health. Women can’t be “free” without it. They might catch the pregnancy disease (as if that just happens magically without any decisions on anybody’s part…)! But what it’s really about is this:

President Obama ensured women’s preventive care – including birth control, too – will be covered by all health care plans, with no co-pay, no matter where we work.

Exactly. Birth control, “preventive care”, something essential to health care, will now be covered as such. No matter where we work, regardless of the institution or organizations personal beliefs. We will trample over their First Amendment rights, because our irresponsibility is more important than their conscience. Never mind the Bill of the Rights – birth control is more important.

Thanks to President Obama, being a woman will no longer be a pre-existing condition!

Now birth control purchased by others is essential to being a woman; it’s necessary care. Because Planned Parenthood has fixed the condition of womanhood. They can cure your fertility problem. I find all of this pretty disgustingly sexist.

Of course, though, there’s no mention of abortion. From reading this speech, you’d think Planned Parenthood didn’t have anything to do with abortions. When in fact they perform an abortion every 96 seconds. But I guess Cecile Richards realizes that they’re losing the abortion debate.

Here’s something I found very ironic.

Twenty-four years ago, my mother, former Texas Governor Ann Richards, spoke to this convention. She reminded us there was a time when folks had to drink from separate water fountains, when kids were punished for speaking Spanish in school, when women couldn’t vote.

This is so ironic because Planned Parenthood began as a key component of the eugenics movement. From the very beginning Planned Parenthood has always existed out of the conviction that all people are not equal, whether it’s different social groups or unborn children.

At least Cecile Richards in her arrogance that she speaks for all women didn’t repeat her mistakes of the past and say Planned Parenthood does mammograms.