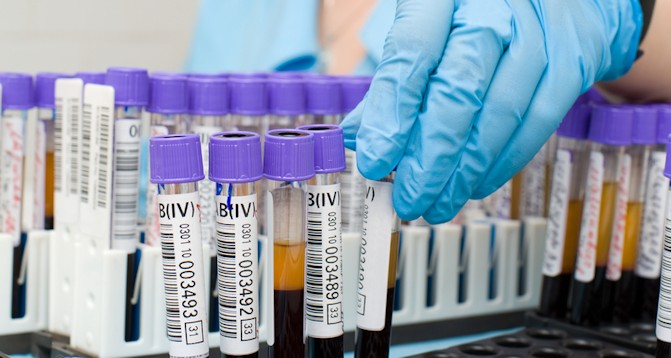 The latest method for prenatal genetic screening involves taking a blood sample from an expectant mother and testing for placental cell-free DNA (cfDNA), which are microscopic fragments of DNA released from the placental cells into the mother’s blood.  These tests are used to screen for various genetic abnormalities in a preborn child and to determine the child’s sex. The test can be performed as early as 10 weeks gestation.

Initially, these tests were only offered to “high-risk” mothers.  Currently, however, they are being offered to all expectant mothers.  Tests can be ordered to specifically check for Trisomy 21 (Down’s syndrome) or Trisomy 18 (Edward’s syndrome), but some companies offer the screening for more than 250 genetic abnormalities.  cfDNA testing is less risky than an amniocentesis, in which amniotic fluid is sampled from the sac surrounding the developing baby, or a Chorionic Villus Sampling (CVS), where a sample of cells is taken directly from the wall of the placenta.  Each of those comes with a risk of miscarriage. While it seems to be a simple blood test that can provide a wealth of information, cfDNA genetic testing has risks of its own. Prenatal genetic screening from a sample of maternal blood is not as simple as it sounds because understanding the results and what they truly mean is extremely difficult.  Both the mother and her OB/GYN provider need to be fully informed of the room for error because lives are on the line.

The main concern, and what needs to be most understood, is that prenatal screening with cfDNA is not diagnostic.  It is a screening test, one that cannot predict with 100% accuracy whether a baby will have a genetic abnormality.  The risks associated with this type of screening can include significant psychological stress to the parents, as well as the death of a child through abortion.  Any abnormal screening test must be confirmed with a diagnostic test, either CVS or amniocentesis.   That said, even these diagnostic tests are not 100% accurate.

Genetic counseling is a critical component for correctly interpreting these tests and helping providers properly counsel expectant parents.  Unfortunately, this does not always occur.  There have been several cases where the mothers chose to abort the child after being informed of a positive test, only to find out later that the test was wrong.  Others have chosen to carry the child to term, despite the huge emotional stress surrounding their decision, fears, and uncertainty.

Misdiagnosis of Trisomy 18 leads to abortion

The following day Meleney-Distassio terminated her pregnancy only to find out within hours of the abortion that her baby had been misdiagnosed.   Meleney-Distassio sued Shevell and Stamford Hospital, and the case was decided in favor of the medical team in November 2016.  It was Meleney-Distassio’s word against her OB/GYN’s.

Regardless of the outcome of the trial, this was an avoidable tragedy.  Had there been a delay in the recommendation or decision to abort, and the patient been referred for further diagnostic tests in combination with genetic counseling, the abortion could have been avoided. In addition, if the medical team had provided Meleney-Distassio with more options, such as speaking with a family who had a child with Trisomy 18, the parents may have chosen to carry to term and an innocent life could have been saved from abortion no matter the diagnosis.

Another story involved a couple from Portland, Oregon, Zachary Diamond and Angie Nunes.  Their doctor had recommended a blood test for prenatal screening (cfDNA) for genetic abnormalities which they were told was 99% accurate. They were understandably then devastated when their doctor informed them that their baby screened positive for Trisomy 18.  Fortunately, the parents waited long enough to undergo an ultrasound and a second screening test which proved the initial screening to be wrong. Their baby was born healthy.

Misdiagnosis of Trisomy 18 sends mother into a panic

When she was 3 months pregnant, Stacie Chapman was informed that her baby’s prenatal screening was positive for Trisomy 18.   Chapman was assured that the test was 99% accurate.   As guidelines recommend, her doctor suggested additional testing to confirm the results.  Out of fear that her baby would suffer, and in the midst of this emotional crisis, Champman decided to terminate the pregnancy right away.  Thankfully, before proceeding with the abortion, she spent the rest of the day researching Trisomy 18 in an attempt to reinforce her decision.   Her concerned and conscientious physician called her later that day encouraging her to wait, to defer the abortion until further testing could confirm the results of the screening tests.  Fortunately, she took his advice and underwent diagnostic tests, which revealed her son did not have Trisomy 18.  Chapman gave birth to a healthy baby boy.

A testing company out of California, Natera Inc., found that 6.2% of women who were told their screening test results were positive for high-risk genetic condition decided to terminate their pregnancies prior to obtaining diagnostic tests for confirmation.  It is difficult to accurately collect data to verify the actual number of abortions that are the result of genetic testing.  Most states are not required to report abortion statistics.   What is needed is a registry to require the collection of data to accurately reflect the number of abortions (surgical and medical) annually – and rationale.  This information would be anonymous, without violation of HIPPA laws.  This is how the Centers for Disease Control and Prevention (CDC) gathers information currently from states that do report to them.

As the recommendation for prenatal screening is becoming more common, concerns are growing in the medical field. The American College of Obstetricians and Gynecologists in collaboration with the Society for Maternal-Fetal Medicine published a Committee Opinion in September 2015 to address non-invasive cfDNA prenatal screening. They stated that they discourage genetic screening by cfDNA for the general prenatal population:

There are also growing concerns regarding the lack of regulation over the development, marketing, and use of these tests.  The National Institutes of Health (NIH): National Human Genome Research Institute has on several occasions called for the Food and Drug Administration (FDA) to expand its regulation to cover all genetic testing.  According to their website, the FDA has yet to take action as of June 21, 2016.

However, in a November 2015 paper published by the FDA, noninvasive prenatal screenings were identified as tests with “potential to yield both many false-positive and false-negative results”.  The problems identified were:

The personal stories, along with concerns expressed by professional organizations and the FDA’s 2015 paper, reinforce the need for caution when utilizing cfDNA screening tests.  They also highlight the need for more direct involvement by genetic counselors and the need for more provider education.  Genetic testing is not appropriate, at least at this point, for the general population of low-risk pregnancies.  Few things in life are “99%” certain.  When lives are at risk, 1% takes on enormous meaning and should not be accepted lightly.