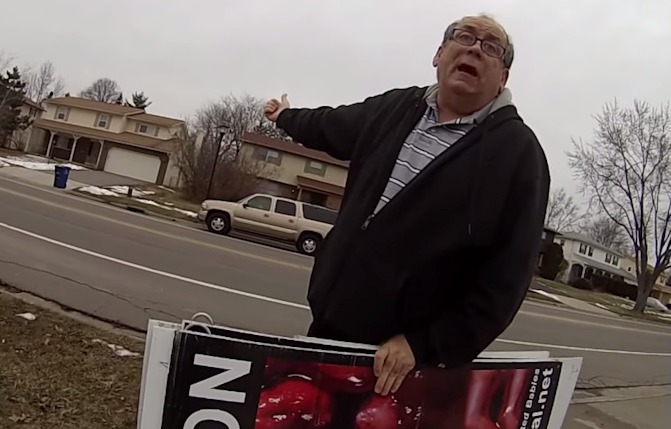 Peaceful pro-life protestors were attacked on public property on Feb. 4th when a raging man swore at them to leave and stole their signs, tearing them apart and throwing them into traffic.

The protestors were from the pro-life group, Created Equal, and the man was a homeowner across the street from Beechcroft High School in Columbus, Ohio. When he saw the signs, he screamed at them too. As a member of Created Equal calmly reminded him they were on public property,  and he couldn’t demand they leave, the man, cursing at them, came yelling across the street, grabbed the signs and raged at them to leave. “Get ’em out of here or I am going to break ’em.” the man yelled, as he tumbled the signs, “wrenching them out of the hands of Jami Beer, Created Equal’s Director of Campus Outreach,” the organization said. Angry man breaks the pro-life signs that he stole.

During the incident, a young lady from Created Equal continued to remind him that he couldn’t take their signs, that he was stealing. He persisted anyway, as he continued yelling at them as he carried the signs across the street. At that point he started ripping the corrugated plastic signs apart. When the young lady asked him not to throw the destroyed signs into the middle of traffic because he might cause an accident, he threw more of them into the road, as if to spite her. His anger remained unceasing. Man kicks pro-life signs onto the road in front of oncoming traffic.

The outreach was intended to peacefully offer information to students and opening up dialogue. Police were called to the scene and the pro-life group Created Equal filed a police report and is pressing charges against the angry man.

Police were called to the scene.

“In a culture killing its children, unfortunately sometimes abortion advocates act violently against those who defend the children. Nevertheless, we refuse to be intimidated into silence.”

The incident is the latest reminder of the venom some abortion advocates display as it follows two similar incidents in which UC Santa Barbara professor Mireille Miller-Young attacked pro-life students and an Ohio woman attacked pro-life demonstrators.