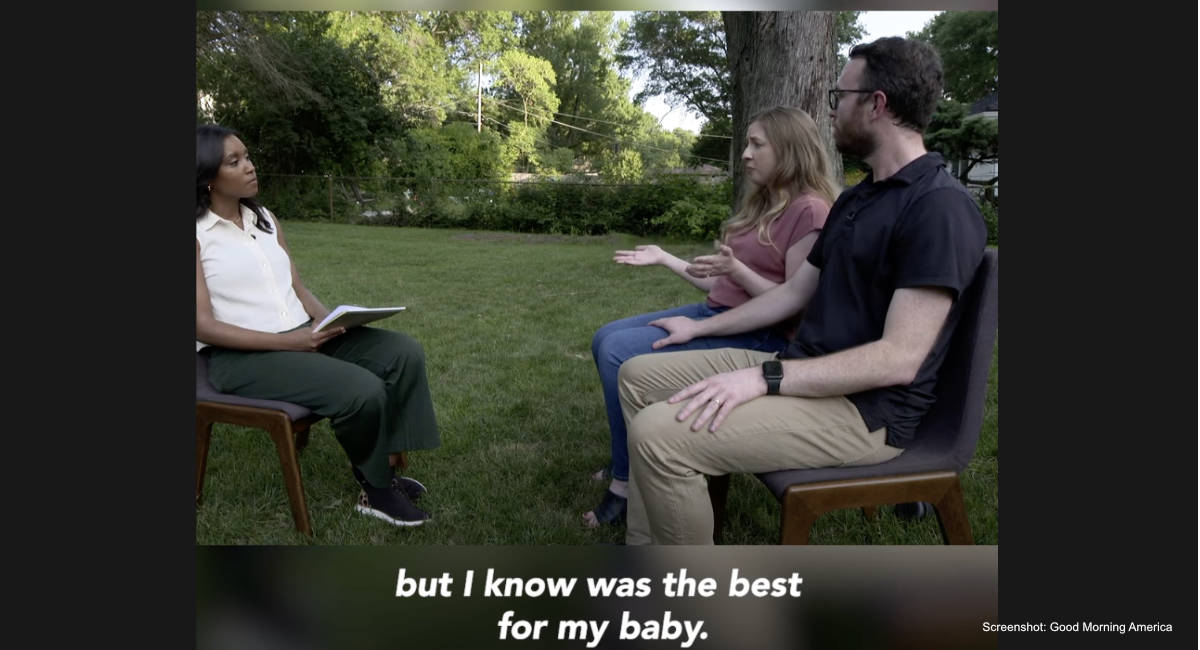 A couple who claims to be Catholic has gone on a media tour about their decision to have an abortion, which they justified due to their child’s disability.

Breanna O’Brien told Good Morning America (GMA) that she was 20 weeks pregnant when she and her husband, Kyle, learned their son had two serious disabilities: Xeroderma pigmentosum group D (XPD) and Trichothiodystrophy (TTD). XPD is an autosomal recessive — meaning inherited — disorder which results in severe sun sensitivity, and can result in a higher likelihood of cancer in the areas where the skin is exposed to the sun. There is also the possibility of hearing loss, poor coordination, loss of intellectual function and seizures. While there is no cure, the life expectancy for people with XPD in the United States is approximately 40 years. TTD is also an autosomal recessive condition, and causes dry, brittle skin, cloudy eyes, skeletal abnormalities, and abnormalities of the fingernails and toenails. It can also cause further sensitivity to the sun. Depending on the severity, the life expectancy for children with TTD can be as short as three years.

Our son would have a “very low quality of life”

O’Brien further explained some of the details of her son’s disabilities in a public Facebook post. “He’d be lucky—exceptionally lucky—to live past 10. He’d have a 10,000 fold increase in his risk for cancer, with most sufferers getting their first cancer before the age of 9,” she said, adding:

Finn would not only be unable to go outdoors without essentially NASA-grade equipment that then deprives him of feeling the wind’s breeze, but he wouldn’t be able to go to grocery stores, malls, schools, or many other indoor venues that use fluorescent lights, which emit UV rays.

In other words, he’d be less allergic to the sun than allergic to anything but a blacked out home — a prison.

If that wasn’t enough, my husband’s recessive gene comes with the highest likelihood of severe neurological degeneration and my gene — well my recessive gene is a mutation recorded in only 2 other cases… ever… in the world. This means he’d likely have the cognition of a toddler *for his entire life*. And that’s the best case.

“If I bring Finn into this world, it seems selfish,” she told GMA. “Like, I’m bringing him into the world just so I can hold him and love on him in the very few short years that he has. But those years will be cruel. He’s stuck in a prison in our house. He can’t be with friends. He is immunocompromised.”

READ: Woman in India allowed to get a full-term abortion due to child’s disability

She added that she was willing to risk those things, but said it wouldn’t be fair to Finn to allow him to be born. Additionally, she explained that, though they both grew up Catholic, she always considered herself pro-choice; however, she said she would never have made that decision herself.

“And then when you’re actually faced with the reality, it went against everything I believed in,” she said. “And you make a decision that’s completely contrary, but I know was the best for my baby.”

Much of the O’Briens’ revulsion at the thought of their son’s life with severe disability seems to be rooted in ableism, the belief that a life which can’t be lived according to their own expectations has no meaning, value, or happiness. The most common abortion procedure in the second trimester is a dilation and evacuation (D&E), or dismemberment procedure, which takes several days and concludes with the preborn child being ripped apart, limb from torso. And this occurs at a time when the baby can feel pain.

So what the O’Briens feel is “best” for their baby is a violent, protracted, painful death — instead of living for several years with a disability, surrounded by the love and affection of his parents.

“It would not be a normal life,” Kyle O’Brien added in the GMA interview. “And the quality of life would be so low that I wouldn’t wish it on my worst enemy.”

Again, this kind of statement is not only subjective, but grossly ableist. One person does not get to make a judgment on whether or not another person’s life is worth living, regardless of the severity of the disability. Every life has value and meaning, and every life is worth living. But Breanna O’Brien then added another bombshell of just how poorly she sees life with a disability.

The Flip Side: “Some of the most important work I can do”

Conversely, another Catholic woman shared her story of raising a child with severe disabilities. In a video posted to Instagram, Stephanie Thigpen showed her son’s face as she wiped his nose for him, as he lay in bed hooked up to a ventilator, which her blog says he needs to breathe.

“Time and again in a ‘woe is me’ manner, I have thought, ‘So all I can do with my life is take care of Garrett?? Of all my different skills or talents, what is being asked of me is to wipe a little face and hook up medical equipment? Shouldn’t I be changing the world in some BIG way?'” she wrote. “St. [Therese] helps me remember the simple loving act of wiping Garrett’s face is some of the most important work I can do. Even if it feels small and simple.”

St. Therese of Lisieux, whom Thigpen cited in her post, is now well known for her approach to holiness. Rather than large acts of sacrifice or a heroic martyrdom story, St. Therese advocated for a small, simple way of living a humble life dedicated to God. This teaching is so significant, and so meaningful, that she was declared a Doctor of the Church in 1997 — meaning she made a significant contribution to the Church through her research, studies, or writings.

St. Therese and her “little way” inspired Thigpen, and countless families like her, to embrace their children with severe disabilities and spending their lives doing small deeds — like wiping noses — with love and happiness. This is what truly makes up doing the best thing for our children, not condemning them to death because their life does not fit into our own narrow model of what it should be.