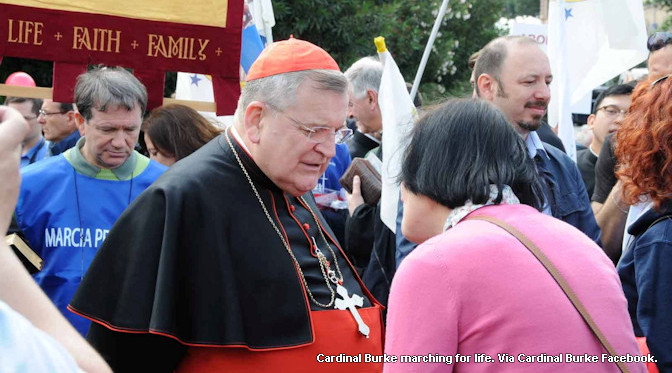 In a new interview published by Ignatius Press, Cardinal Raymond Burke told journalist Guillaume d’Alançon that his mother became seriously ill while pregnant with him and was advised by her doctor to have an abortion.

As reported by the Catholic Herald, with five children at home, the doctor felt it would be wise for Cardinal Burke’s mother to abort her baby in order to ensure her own health.

“My parents refused,” said Cardinal Burke. “My parents told him that they believed in God and that Christ would give them the necessary help. My mother gave birth to me, and everything went well. I was therefore quite touched by this question of defending human life, because I could very well have been killed.” In the book, published last week as “Hope for the World: To Unite All Things in Christ”, Cardinal Burke refers to abortion as an “attack on life” and says that “the sexual act has been distorted by contraception.”

In addition, Cardinal Burke says that the devil wants us to remain silent on issues such as abortion. Fear keeps pro-lifers from speaking out and the devil convinces pro-lifers that being pro-life is a personal decision and that we can’t stop other people from having abortions – an evil lie.

“The devil, of course, wants to discourage us: he tries to sow doubt in our minds about defending human life publicly,” says Cardinal Burke. “And he subtly tempts us to remain silent, to mute our conscience, to tell ourselves that we are personally against abortion but do not have to express our faith and moral convictions in public.”

Cardinal Burke also goes on to say that President Obama is a “totally secularised man who aggressively promotes anti-life and anti-family policies”.

Having been outspoken against abortion in the past, it was during the 2004 presidential campaign that Cardinal Burke told Catholics in a pastoral letter that they should not vote for any politician who supports abortion. He later stated that they could, as long as there was a moral issue greater than abortion at hand.  However, he said he couldn’t think of any issue that would be more important than abortion.