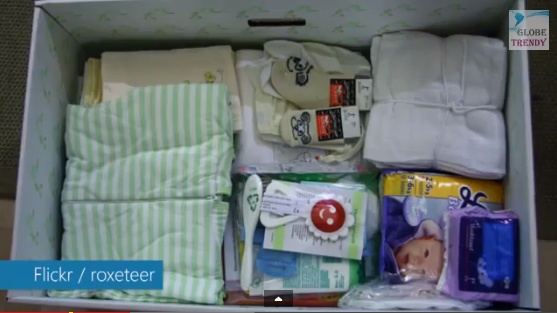 A government initiative in Finland has been credited with possibly helping to lower the infant mortality rate in the country. Finland was named the best place to be a mother in 2013, and this may be due, in part, to the caring attitude of both government and community towards both infants and mothers. The country stands in stark contrast to nations such as China and India, where population control and gendercide make motherhood frightening and often impossible, and the Congo, where maternal mortality is highest.

So what is Finland doing to make parenthood and infancy such a successful experience? One of its many initiatives provides boxes for new parents filled with baby essentials to help parenting start off smoothly. The box contains helpful items like diapers, blankets, gender-neutral clothes, books, and toiletries. The emptied box is often then used as the baby’s first bed.  The country’s history of providing baby box to new parents dates back to 1938. MSN News reports:

The box is given to parents regardless of their socioeconomic status to ensure that every parent has at least what is provided by the box. Although the Finnish government offers an alternative to the box — a 140 Euro grant — 95% of parents opt for the box. The box has been called a “collective solution” to lower infant mortality.

One father who was the beneficiary of a baby box, said:

It felt to me like evidence that someone cared. Someone wanted our baby to have a good start in life. It strengthens that feeling that we are all in this together.

The federal government in the United States takes a drastically different approach to family planning, choosing in most cases only to help limit childbirth (through initiatives like grants to Planned Parenthood, which does not actually assist in cases where parenthood is the choice). Some states, however, have initiatives like pro-life license plates, which help direct funding to pregnancy resource centers that provide care similar to that of Finland’s baby boxes initiative.