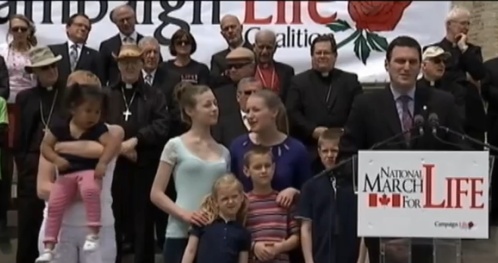 It’s rare that a March for Life event makes it into the news. It’s even more rare, when the reporter is unapologetically and enthusiastically pro-life and the Toronto Sun gives her over 8 minutes to report about the march. But that’s what happened in May at the Toronto March for Life.

On the Toronto Sun News’ The Arena, the news anchor admits that the public doesn’t hear much about the pro-life march because it goes against the “the grain of the always accepted pro-choice stance.” Faith Goldy is the Straight Talk contributor who covered the event calling it “electric” with 20,000 plus participants.

Goldy and the anchor discuss the issue of sex-selective abortions as well as Justin Trudeau and his pro-choice stance, and the truth about RU-486, which has caused the death of numerous women. They also speak about how the March for Life is not all about religion, but more about science.

“You don’t need God to understand why life matters. Why the arguments that exist around the pro-life movement exist in the first place,” Goldy explains. She notes that a group of Humanists, who don’t believe in God at all, were at the March for Life using science as their reasoning as why abortion is murder and therefore wrong.

Goldy goes on to admit that she was once pro-choice. However, she says that once she started listening to pro-life arguments, she realized the rationality of those arguments and found it more and more difficult to argue back in favor of abortion. She half-laughs at the attempts of the 25 or so pro-choice protestors who showed up at the march, pointing out that none of them shared any “sensible” arguments in favor of abortion at all.

In one instance, the anchor cuts to a video of the march with a priest speaking about people having a “greater respect” for life. Ironically, as he is speaking, a few pro-choice protestors begin to run around topless screaming at the pro-lifers as security tries to shield them.

Other pro-choice protestors refuse to speak to Goldy, while one likens a fetus to a fly. That pro-choice protestor and others repeatedly referred to unborn children as a bunch of cells, making it clear that they have never fully researched what a fetus looks like or the fact that abortion is legal through all nine months of pregnancy in Canada, or the fact that they too are a bunch of cells.

But one pro-choice protestor really raised eyebrows when she said this:

Goldy responds quite frankly to the pro-choice non-arguments by saying that it’s time to get real. She asks of pro-choicers:

Is it more shocking that pro-choice arguments are so absurd or that a media outlet gave this much airtime to a pro-life reporter covering a pro-life event? Either way, the Right to Life movement took a big step forward with Goldy’s news report.