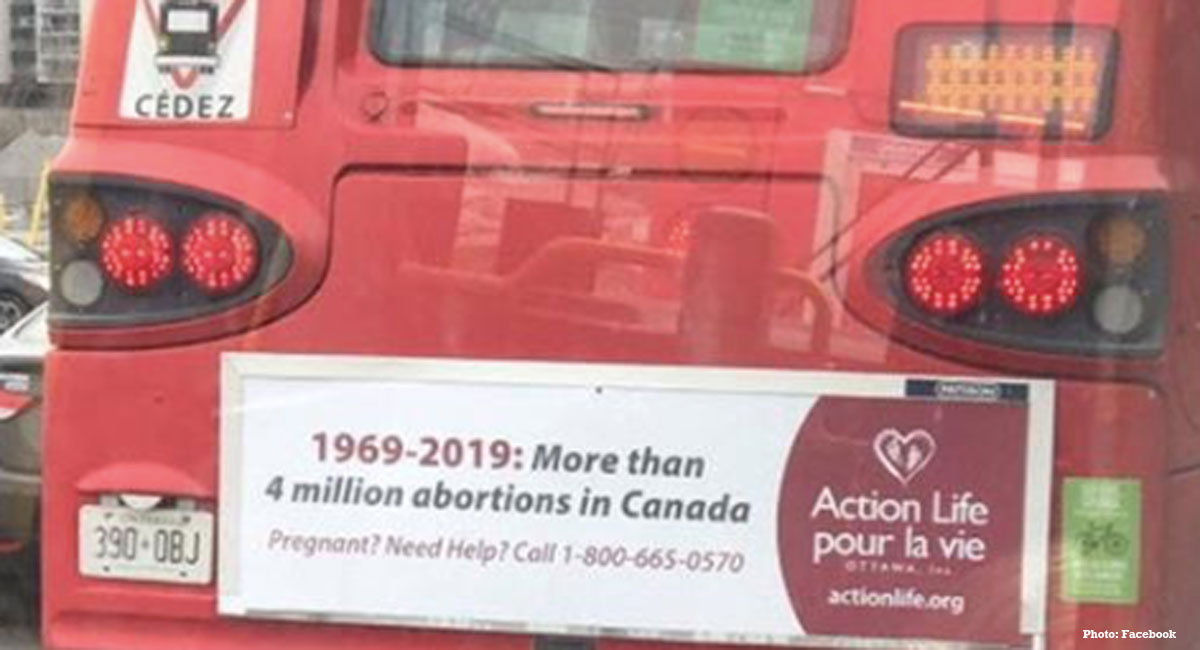 In Ottawa, Canada, two city councillors — Catherine McKenney and Jeff Leiper — have had a seemingly over-the-top reaction to a pro-life ad posted on a bus, which simply reads, “1969-2019: More than 4 million abortions in Canada. Pregnant? Need Help? Call 1-800-665-0570.” The ad contains a logo from LifeAction.org, with a heart containing baby footprints featured as part of the ad.

The two councillors, reports the Ottawa Citizen, have called the ad a tactic to “reverse decades of pro-choice gains.” The ad, the Citizen reports, is viewed by the councillors as “purposely misleading and affecting women’s health” because the phone number and offer of help implies that women will be directed to counseling if they call. “And what the number leads you to are advocacy groups that are anti-choice and very much misleading and have no place on our public transit system,” Catherine McKenney said. The two councillors — unsurprisingly, given their unwarranted outrage over the ad — has asked the city to remove the ad from the buses. “The fact that they are displayed on public property is galling,” they said.

But given the fact that the bus ad features a heart with baby footprints, it is difficult to ascertain why the councillors feel women will be misled… until you realize that they believe offering options other than abortion is an unacceptable and “misleading” practice in and of itself. The councillors wrote in a statement, “Charter rights to free speech are important, but it’s never acceptable to interfere with the constitutionally protected right to access health care” and implied that those who believe otherwise are using “lazy reasoning.” The Citizen reports:

“If we put something out on public property to counsel women on their health no matter what that is, it has to be something that we can stand behind as a city,” [McKenney] said. This is especially important when the targeted audience is vulnerable, she said.

The number on the ad is for a pregnancy resource center in Winnipeg, an openly pro-life center which assists women experiencing unplanned pregnancies who are looking for life-affirming options. The director of Action Life, Louise Harbor, was completely puzzled as to the councillors objections to the ad. “We have not presented ourselves as a counselling service or as a pregnancy support service which is why we don’t use our own telephone number,” she told the Ottawa Citizen. “We direct women to where they can find help at this national help line number. And we’ve used that number for many, many years.”

The Citizen points out that a similar bus ad from the same group in 2016, stating, “Abortion stops a beating heart” and featuring a helpline number, also “provoked outrage on social media” when it was released.

But Action Life’s director, for her part, believes “women have the right to know that pregnancy and support centres exist in Canada and I don’t see why anybody would object to them.” But the city councillors claim they want women to get “impartial medical advice” during pregnancy, which they don’t believe they will get from pro-life centers. Whether or not the councillors would object to an ad encouraging abortion-related services is unknown, but the implication seems to be that only pro-life groups have a bias.

The city councillors await a decision as to whether the ad violates the Canadian Code of Advertising Standards.

Objections to pro-life ads aren’t limited to Canada. Earlier this year, a company refused to run a “Me. Still Me” pro-life ad featuring an ultrasound photo next to a newborn photo, telling an Indiana pro-life group that if they ran their ad, that would mean they’d have to accept ads from groups like the Ku Klux Klan. The pro-life group won their lawsuit against the ad company. In Canada, a different pro-life group lost its lawsuit against the city of Grande Prairie in Alberta after the judge called it “hatred against women” which could cause women who have had abortions “psychological harm.” That ad featured the message, “Abortion kills children” and showed two images of preborn children at different stages of development, followed by a red circle with the word “GONE” inside it.