The abortion industry is crying foul after GoFundMe shut down the site of a woman begging for money to kill her baby. NARAL Pro-Choice America likens a person raising money for a late-term elective abortion as being in the same category as a medical emergency.

Playing the victim card, laced with hyperbole, NARAL says the poor women in need of abortions are being treated like terrorists and criminals and drugs, adding, “That’s right, they consider abortion in the same category as terrorism and violence.”

Of course GoFundMe didn’t actually say that. This is a further example of the pro-abortion rhetoric that plays victim every time someone can’t kill a baby at will with someone else paying for it. What GoFundMe said was this:

The Daily Dot shows the entirety of that email: 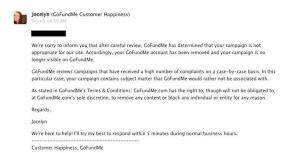 The fundraising solicitor is a young woman named Bailey who is a classic example of the “abortion-on-demand-without-apology” mentality permeating the industry. Bailey’s GoFundMe page justified her abortion this way, as the original page said she’s having “pregnancy complications”:

“It’s just been really, really painful. Like I said, I just got the ultrasound done and haven’t really been to the doctor very much, so I can’t say there’s a specific condition, but I know that it’s worse than any menstrual cramps I’ve ever had. Sometimes the pain is so bad that I can’t get out of bed, and I can’t go to the bathroom. When I cough, it feels like my organs being shredded inside of me. For a second, I was afraid it was ectopic, because that’s supposed to be incredibly painful, but it’s not. I don’t know if there’s any medical terms for what it is, but it’s difficult.”

Not even feigning a sympathetic story, Bailey then justifies her need to kill her baby with a blasé attitude that demonstrates a culture that has lost its shame. In an interview with Vice News, Bailey says she just really doesn’t want to be a mom. That was evident by the fact she entitled her fundraising page “Stop Bailey From Breeding Fund.” 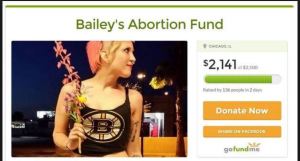 The real opportunity to stop Bailey from breeding was available before she made the choice to engage in an act that would cause her to breed—and act she waited until the 19th week of pregnancy to address. She gets one thing right, though, it’s a real surgery and she says she’s nervous about it:

“Yeah, I’m nervous. It’s scary. It’s a surgery. In Illinois it’s a two-day surgery. And it’s painful, like any surgery is going to be. It’s just an absolutely necessary thing, so I’m more nervous about running out of time than any pain.”

The idea that she’s in a crisis situation because her pregnancy is causing her pain and inconveniencing her life is elaborate enough. Pregnancies cause pain. A new body growing and developing inside a person may hurt more than some menstrual cramps. And if “breeding” is that repulsive, people have a choice not to. Bailey makes no claims of abuse or rape to garner sympathy; she says flat out she doesn’t want to be a mom and wants people to give her money to abort her baby before time runs out. Her other choice would be to carry the baby the next 20 weeks and let someone adopt him or her. But Bailey doesn’t have time for that, it seems

That NARAL would take up defense of such a flagrant example of the radical side of abortion is also shameful, but not surprising. It used to be that those who called themselves pro-choice defended their actions by saying abortion should be rare and it should not be a desired outcome, but occasionally was needed. Now a story like Bailey’s is becoming a national statement of an abortion extreme.

This week, NARAL sent emails and posted on its webpage this week links to a petition to GoFundMe. Part of their statement says:

“You know what else GoFundMe restricts raising money for? Terrorism, violence, and drugs. That’s right, they consider abortion in the same category as terrorism and violence.

“Abortion is standard medical care that one in three women needs. They don’t need stigma, shame, or judgment.”

The fact is, GoFundMe’s new policy covered a myraid of things, but each was in its own category. GoFundMe listed abortion under “Termination of life” and the only things it likened to it were these:

Of course, GoFundMe is a private company that has a right to make a policy about how it conducts its business, and the policy applies to a host of fundraisers, not only Bailey’s. But NARAL doesn’t like that and started a petition demanding GoFundMe restore abortion fundraising. You know, because abortion is so needed. It’s a medical need. NARAL says so. Bailey says so.

You tell me. Does Bailey need this abortion? These days need has become a word to mean “what I want right now so I can have my desires met no matter what the cost to someone else. And PS, you should pay for me to have it.”

In fact, Bailey said something to this effect on her page, using a third person voice:

“Bailey is currently unemployed, completely broke, in debt, and in no position to hold down a job due to severe symptoms of a rough, unplanned and unexpected pregnancy. Aside from having no desire to raise a child, she is economically unstable and can barely afford to support herself, which means having enough money to pay rent, smoke cigarettes, drink rockstar, support her friends in prison, and if she’s really busted her ass, maybe go to a show or two.”

As a model for pro-choice people, Bailey misses the mark. Instead, her campaign has shed light on the reality of abortion and its total disregard for human life.