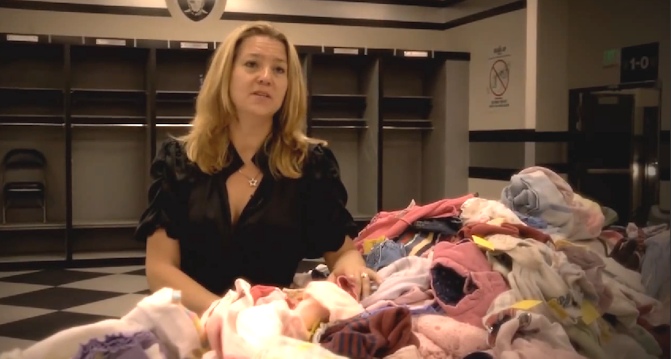 In 2005, Lisa Klein was inspired to  search Craigslist for someone who needed help. It was a week after Hurricane Katrina devastated New Orleans, and she found out about a church there where many displaced families were camping out. The ad said that about 50 families had nothing with them except the clothes on their backs, and Klein knew she would help. Among the needs were baby clothes

“Drop off your used baby clothes on my porch,” she told her friends, “and I will send them to the church.” Within days, Lisa had amassed more donated baby clothes than she could afford to mail from California to Louisiana. After sending about 200 pounds of clothing across the country for New Orleans babies in need, Klein sought a way to put the rest of the donations to use in her own neighborhood.

She decided to drop off the extra clothes at a hospital in Oakland. She knew she had found a way to fill a dire need, and called her charity Loved Twice. All You magazine featured Klein’s organization in an August print piece about four women who found ways to help children in need. Klein faced obstacles at times, but recalls that everything always worked out for the best:

Every time a wrench was thrown into the works, something solved the problem. A box company called me out of the blue to offer 4,000 boxes. Another time, someone from the Rust Charitable Foundation in Kansas City phoned and said they’d help found a new warehouse. Wells Fargo headquarters called, asking how the bank could help. I said, ‘Rent a U-Haul, send three strong guys to pick up 1,000 pounds of baby clothes from my basement, take them to your conference room, sort them into boy and girl boxes and deliver them to these five social service agencies.’ And they did!

Klein learned that asking companies for help was key to her organization’s success and growth. According to All You, the charity has collected 735,000 garments, partnering with 154 social services agencies to get the clothing from donors to babies in need. Many of the garments go to local children, and about 20 percent are given to Loved Twice chapters which help babies in four states across the country. Find out more about Loved Twice here.