When nothing else remains, love will.

There are so many things we need to teach the next generation about the pro-life cause. The science, the truth about what abortion does to the mother, the reality of fetal pain, the communication skills needed to effectively defend the pro-life position…the list is endless. Yet sometimes amidst all the information and reasoning and academic papers, we can miss transmitting the most essential aspect – love.

Why care about abortion harming women? Because we love these mothers, and what happens to them matters. Why does it matter that the aborted infant feels pain? Because we love the unborn person who is suffering. Why the science demonstrating the humanity of fetuses? Because we love life, and value it. We need to pass on all aspects to the next generation, but always and only within the framework of teaching our children to love. And sometimes – sometimes actions truly do speak louder than words, and the most unassuming person becomes a hero for the defense of life. 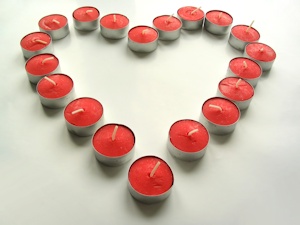 I’ve had the privilege of attending many pro-life seminars, debating for the cause of life, testifying before legislative assemblies, and working “on the ground” for pro-life ministries and leaders, yet I learned the most from one little “nobody”: one woman who, in her quiet, unassuming life, passed on convictions and truth that I could not escape even if I tried.

My grandma lived through a lot, including her fiancé’s service and injuries in World War II. When Grandpa came home and recovered, they married quickly, years before Grandpa would be able to finish his college degree, which had been sidelined due to his service. He drove a school bus to pay the bills; it was one of the only jobs that would also accommodate his school schedule, but it didn’t pay much. So to say a surprise pregnancy, resulting in my eldest uncle’s birth just ten months after the wedding, was “at a bad time” was putting it nicely. Grandma and Grandpa didn’t have a place to live of their own, and barely enough money even for food – I still recall Grandma telling me that it was very common for her and Grandpa to eat only squash or beans for dinner, because otherwise they would not have money to feed their child, too. Yet she loved. Yet her son’s life was a gift. His life was more important than money, more important than their “plans,” more important than personal comfort. The same was true for her second son, born not that long after. My grandma taught me that babies don’t always come at the best, most convenient times, but they are always, always worthy of love, and that sacrificing to give life is worth it.

By the time my father was in kindergarten, Grandpa was an electrical engineer, they had a house, and life was markedly easier. So my grandparents did the next natural thing – open their hearts to orphans in their city through foster care. Over the course of the next several years, more than 30 children found a home in Grandma’s arms. My dad and uncles did all the normal things little boys do: played baseball, went fishing, attended school…and learned to change diapers, feed small people, and treasure each little person who came through their doors. My grandma passed on a legacy of loving life, in the most intensely practical way, to her three sons, who in turn passed it to their children, and who all still possess that “magic touch” with little ones. My grandma taught me that my material blessings are best used to love others, especially the weakest, and to find the greatest joy in serving others. 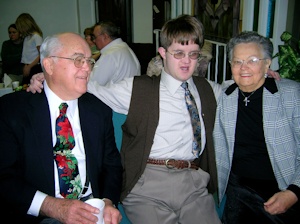 My grandparents and Clark.

She had a special place in her heart for special-needs children, too, and it these memories which are the most vivid and powerful yet to this day. One young man, several years older than I, was a particular friend of hers. Clark was born to one of my grandma’s best friends and was a “surprise” pregnancy, coming very late in life, accompanied by the diagnosis “Down syndrome.” The type of baby that 90% of families choose not to birth. Grandma had a special place for Clark, and she loved him dearly. She and Grandpa regularly cared for him on days and even nights, so that his parents could take an occasional vacation or day trip, and didn’t flinch when it meant that Grandma had to learn to navigate things like oxygen tanks and communicating with a nearly non-verbal young man. As Clark got older, he wasn’t much one for hugs or physical affection, and he tended to keep a pretty specific personal space, but Grandma was a completely different story, and the joy they both showed at seeing each other was marvelous to behold. Hugs abounded then, even if no one else was so privileged! Some of my earliest memories are of Grandma teaching me how to play with Clark, what sorts of things he enjoyed, how to be patient with his limitations and forgiving of occasional accidental aggressiveness, and to love and treasure people and their differences.  Grandma taught me that the 90% of children with Down syndrome who are never given a chance at life are priceless treasures, too.

Karen was another of Grandma’s special treasures. Born with a condition that left her severely brain-damaged, she had no control over movements or her voice and remained in an infant-like state. She was the type of child doctors would say has little “quality of life,” who probably “doesn’t comprehend,” and who is certainly “a burden” to such a productive and progressive society as ours. Then one day, as I helped Grandma in the church nursery, Karen was brought in to be watched while her parents attended the service. Grandma didn’t reach for the healthy, picture-perfect baby sitting on the floor, absorbed in a teething toy. She went to Karen – nearly a teenager, lying on a bean-bag chair, vocalizing randomly, limbs contorted and twisted, moving her head without any real direction. She knelt down, despite painful, arthritic knees, reached for Karen, and held her close, calling her name and beckoning her to give Grandma “that beautiful smile.” Decades later, it remains one of the most beautiful scenes I have ever witnessed.

Grandma radiated love. I saw the same love she directed at me towards Karen. Not patronizing pity, like a superior gives to an inferior, but pure, unadulterated, joy-filled love. The way one human soul treasures another. Karen had value, she had worth, she was a priceless gift. She meant something to Grandma. And as Grandma knelt there, calling Karen’s name, the little girl who “couldn’t respond” and “couldn’t move voluntarily” turned her face towards Grandma’s voice and broke into the most beautiful smile of joy. The little girl who “couldn’t be reached” responded to one thing: love. Grandma taught me that no matter how severe the handicap or illness, it is never beyond the reach of love.

Then I began to learn the most bittersweet lessons of all – the joy of serving the one who had been the servant. Alzheimer’s began to set in, and deteriorating vertebrae left Grandma in constant pain. She made it to my wedding, but just a few weeks later suffered a blood clot that accelerated the dementia exponentially. I had the privilege of sitting by her in the hospital and spending nights on those awful fold-out chairs that supposedly double as beds, and I watched what Grandma became when almost everything was stripped away. She whispered the words of her favorite hymns as she drifted off to sleep. She belted out “Jesus Loves Me” with gusto I had never before seen. She “sewed clothes” for her family, believing the hospital sheets to be reams of material. She cooked with unseen utensils and food, and she talked endlessly of her children and grandchildren, often not realizing they were right there with her. When nothing else remained, Grandma loved and served. 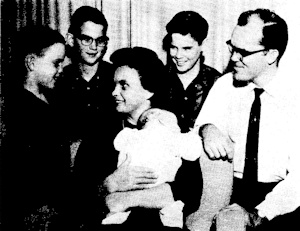 My grandparents with some of their foster children.

She made it through, and not two years later, I had the joy of placing my first child, only a few weeks old, into her arms. I watched in amazement as her normally trembling hands cradled my son without a waver, even when she slept. When he fussed, she instinctively soothed and patted him, though for years her movements had been awkward and uncertain. As she whispered, “I think he’s sweet…,” her voice changed back to the normal pitch I had grown up with, and when I asked her, “What are you thinking about?,” she answered my question, though she had rarely had an answer for the past many years. “That baby!” I told her about her seventh great-grandchild, born shortly after my son, whom she was to meet in a few weeks. “Two babies? I will be so happy I won’t know which way to look!” She remembered and communicated so little, but her love for the tiniest of humans was such a part of who she was, it remained when everything else faded away.

Not two weeks later, she suffered a stroke that would end her life, and as I sat by her hospital bed for the last time, I realized I had learned from Grandma my final lessons. Lessons I would have never been taught if the likes of Peter Singer ever get their way, and euthanasia becomes the fate of the elderly or ill. I learned the beauty of service. I learned to constantly ask, what will remain in me when everything else is stripped away? Will I create a pattern of loving people that will endure when almost nothing else is left? Will love be so deeply ingrained that it will last until the end?

And I realized again: this is what the next generation needs to see. This is what supports, undergirds, and gives value to the fight for life. A love for the mother in crisis, a love for the unborn baby showing up at the “worst possible moment,” a love for the little ones with special needs, a love that sees value in children deemed “unreachable.” A love that is so ingrained, rooted so deep, that when nothing else remains, love will.

So now faith, hope, and love abide, these three; but the greatest of these is love.