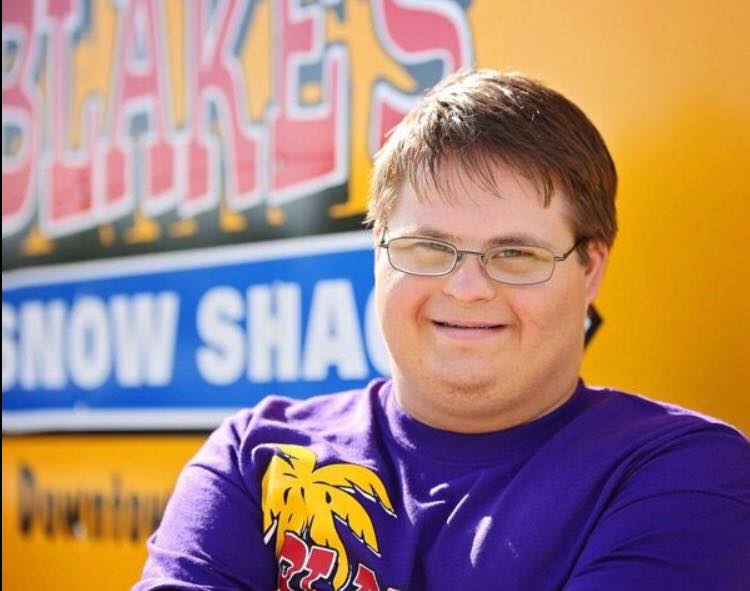 A young businessman from Sanger, Texas, who has Down syndrome will have his snow cone business alongside Fortune 500 companies in the upcoming NASCAR Sprint Cup Series race at Pocono Raceway.

At the age of 20, Blake Pyron became the youngest business owner in Sanger when he opened Blake’s Snow Shack in early May of this year. Blake’s mother previously told Live Action News that when Blake was born, she was asked by her doctor to have an amniocentesis, but she refused.

“We didn’t take [the amniocentesis] because we knew we would never have an abortion,” she said. Last month, I had the privilege to attend the grand opening for Blake’s Snow Shack where Blake’s mother, Mary Ann, proudly told a supportive crowd on Mother’s Day weekend how her son had been a blessing to her family, as well as their community. Blake Pyron along with his mother and brother

Today, Blake’s inspiring story of success as a Down syndrome business owner has been featured on several major news outlets. According to their press release, Blake’s story reached the desk of Circle Sport-Leavine Family Racing team owner, Bob Leavine, who lives in Texas.

The Leavine family connected with the story because their 21-year-old grandson, Tanner, is autistic. This prompted the Leavine family to create a new paint scheme for the No. 95 Chevrolet at Pocono that will elevate their stories. The No. 95 car will feature Blake’s Snow Shack, as well as another organization the Leavine family says has benefited their grandson. “These are great stories that people need to be aware of and we had an opportunity to do that on our Pocono car,” said Bob Leavine. “We wanted to put it on the car so we could make a statement and say, ‘Hey we are behind this.’ We need to help our special kids because it takes a lot of resources. People need to know about this because they can help.”

Blake’s mother was thrilled when she received the call with the opportunity to showcase Blake’s Snow Shack on a NASCAR race car. “The Leavine family – they touched our hearts,” said Mary Ann Pyron.

“We have tried to show other people that you can believe in yourself and your child can do anything that they want to. There is no limit for my child. And I feel that the Leavine family reaching out and for them to share us with ‘NASCAR Nation’ is great. We feel beyond blessed!” Tragically, women who are told their preborn child has Down syndrome are often pressured into an abortion, something disability advocates call a horrible and violent form of discrimination. For that reason, Mary Ann wants any mother of a child who is given this diagnosis to reach out to her, and she has given Live Action News permission to publish an e-mail address where she can be reached. That address is maryannpyron@hotmail.com.

Blake and his father will attend the NASCAR Sprint Cup Series race in Pocono on Sunday, June 5. The No. 95 crew will wear purple Blake’s Snow Shack t-shirts during the race weekend – the same t-shirts that Blake wears for his business.