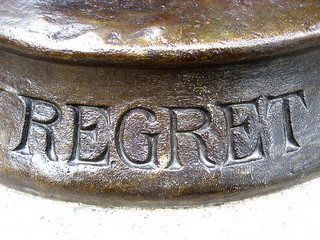 Kate Spicer’s story illustrates how many women come to regret their choice of abortion once they see the full picture, years later.

Daily Mail has published an article, written by U.K. author Kate Spicer, who tells her tragic story of abortion, regret, and childlessness. Her story haunts me as well because her baby would have been born in 1987, my own birth year. Though Spicer has still not come to the full realization of what her abortion did to her child (in one paragraph she talks about her “fetus” whom she did not allow to become a “child,” and in another paragraph she refers to her baby as her “son”), her story illustrates how many women come to regret their choice of abortion once they see the full picture, years later.

Even more tragic, Spicer writes that “sensible girls” got abortions back then and that she would advise her 17-year-old god-daughter to get one today if she became pregnant. Even all the years of wondering what could have been, the years of empty arms, the years of sad infertility have not fully convinced Spicer that abortion is a choice that will come to haunt every woman one day. Regardless, Spicer shares the details of her own dilemma, caused by abortion, and how she thinks of her loss each day. Her story serves as a warning for teenage girls – or anyone – who believe that abortion is an easy choice, free of the haunting death of an innocent child. It is anything but…

A unborn child at 9-10 weeks, the age of Spicer's baby at abortion. Photo credit: lunar caustic on Flickr

In 1987, Spicer found out she was pregnant at the age of 18. After trying two “home remedies” (neat gin and falling down the stairs), she scheduled an abortion. The doctor, in a possible attempt to give her more time to think about her choice, told Spicer she would have to wait two months – until her second trimester – to have the abortion. Once her parents found out she was pregnant, though, they hurried the procedure, and Spicer had her abortion at nine weeks. (A nine-week-old baby, by the way can wriggle, shift, and dance. He has fingerprints and can grasp objects in his hands. Apparently, babies at this age love to feel anything they can touch.)

Now Spicer is 42, and this baby has been her only child. Even when she went off contraceptives, she has still been unable to get pregnant. Spicer writes that it is good that she was not forced to keep her baby’s father in her life, but she admits that he was not the only answer to her keeping her child:

Yet if someone had told me then: ‘This is your only chance to be a mother — it’s now or never’, I suspect that between us, my mother and I would have made a fair fist of raising the child. Now, at the age of 42, it is the ‘if only I had known’ that haunts me. The idea that I passed up my only chance to have a child. If I dwell on this thought, it is disturbing, so I try to avoid it.

Spicer writes that the year she had an abortion, she “became a statistic, one of the 174,000 women who had a termination that year.” Furthermore, she dispels the myth that the immediate relief some women feel after an abortion is lasting:

The euphoria far outweighed any physical discomfort when I left hospital. Any shame had gone, together with the nine-week old foetus: I was free again, I could breathe.

In fact, and rather alarmingly, I felt incredibly grown up. To my mind, the abortion was almost a rite of passage to being a proper woman.

Terminating a pregnancy seemed far cleverer than pushing double buggies in small-town Devon, which is what some of my peers were doing after their O-levels.

Today, I feel more emotional, guilty almost, about that bundle of cells I got rid of. In the bitterest of ironies, that terminated pregnancy remains the sum total of my reproductive history.

Spicer reveals that, years later, when she felt her maternal instinct, she was shocked at its force. She relates an “overwhelming desire” she had to protect and care for a street boy she met in Brazil. And she tells how her tough attitude was merely a façade to cover the regret she held inside:

The family unit … looked dull, claustrophobic and suburban. I was in denial, but every now and again my real feelings would break through the tough-girl rationale. …

I began imagining what he might have been like — a tall and sandy-haired boy, who would have been 17 at  the time. I was 35, the age when the  experts say your eggs and fertility start declining.

Spicer publicly analyzes her life after abortion and her feelings. She wonders if she chose some of her romantic relationships because she believed she never deserved to have another child. She introduces her niece and nephews, who “have brought into even sharper relief the phenomenal love and caring instinct inside the average woman.” Simply put, you could say that Spicer seems to believe that every woman was cut out to be a mother – at least the mother of any child she conceives. It is against a woman’s nature to kill her child. And oh, the pain when the one child you kill turns out to be the only child you ever have.

May we be bold enough to help others live with no regrets. Photo credit: quinn.anya on Flickr

First, Spicer shares the story of a successful author who kept her child, even in an inconvenient pregnancy, and admits to wondering what she would have done if someone had urged her not to have an abortion. Indeed, what would she have chosen? What would the women and girls around us choose if we would have the courage to urge them to choose life – even if it causes us to lose friendships? Undoubtedly, some would choose life and not have to live with the pain and regret of death.

Finally, Spicer quotes her father. His words should give us all pause:

More than 40 years in medicine have left me with a disgust for the absurdity of terminating perfectly viable life in the obstetrics department while down the corridor, in reproductive medicine, life is being forced into the bodies of women who are past their child-bearing prime.

Indeed, lost life always has its own consequences.