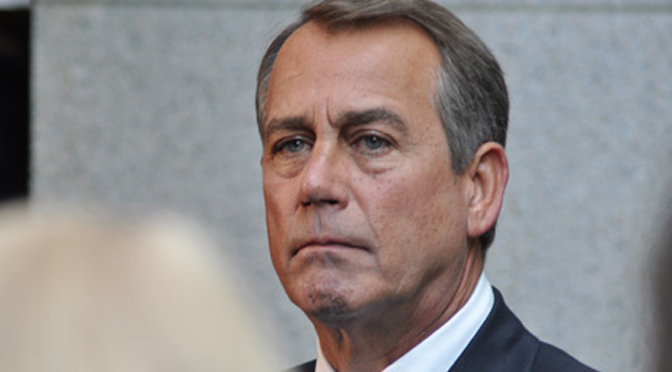 John Boehner will resign as Speaker of the House and give up his seat in Congress. He made this breaking announcement in a meeting with Republicans this morning.

Boehner’s last day in Congress will reportedly be October 30. The long-serving representative was first elected to Congress in 1990, but his time as Speaker has been marred by infighting between conservative and moderate Republicans.

Boehner’s resignation comes amid whispers that he was about to be pushed out by a more conservative challenger; his successor is assumed to be Kevin McCarthy, who Boehner has been grooming for the job. Rumors are already flying, however, that conservative Republicans are looking to keep McCarthy from taking the position.

What will a Boehner resignation mean for pro-lifers, and more importantly, will this make it more likely that Planned Parenthood’s taxpayer funding will be redirected to the more than 13,000 comprehensive health care clinics that serve low-income women and their families?

One of the reasons Boehner repeatedly had to fend off threats of being ousted as Speaker is because he refused to stand firm on redirecting Planned Parenthood’s funding to more comprehensive health care clinics that do not perform abortions. It was assumed that a vote would be forced this fall by Rep. Mark Meadows, who, along with other leaders in the GOP, was tired of Boehner’s unwillingness to stand up to Planned Parenthood.

Last year, Boehner even went so far as to lead over 170 Republicans to vote yes on continuing funding to Planned Parenthood, saying that he couldn’t defund the abortion giant because Republicans didn’t have the Senate. He promised things would be different in January, but nothing changed at all, and Boehner never moved to defund Planned Parenthood.

Boehner has been unwilling to risk a government shutdown over Planned Parenthood (though this would be caused by the promised veto of President Obama), despite evidence that the organization is breaking the law, and refused to even say that defunding Planned Parenthood was his ultimate goal. His latest strategy to redirect Planned Parenthood funding was to push it off until December – and we know now that he won’t be in Congress then.

This gives pro-life representatives an opportunity, then, to elect an actively pro-life Speaker of the House who is willing to take on Planned Parenthood and fight to see their funds redirected to health clinics that truly serve women.

The House did recently vote to redirect Planned Parenthood’s funds, but the bill was sponsored by Rep. Dianne Black. House Majority Leader Kevin McCarthy was the one who spoke in favor of defunding the organization, not Boehner. Clearly, there are people willing to fight the good fight, so with Boehner out of the way, it’s possible that pro-lifers in Congress will have greater success in separating Planned Parenthood from its undeserved government funding.