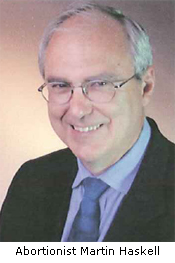 On Monday, a judge ruled that late-term abortionist Martin Haskell had to close his abortion clinic for good. Haskell was given five days to appeal the judge’s ruling. Operation Rescue has revealed that Haskell’s attorneys have decided not to file an appeal, meaning that the clinic will close permanently, with surgical abortions to end tomorrow.

Attorneys for Martin Haskell’s Sharonville abortion facility have announced that they will not appeal a ruling issued last week by Judge Jerome Metz upholding the Ohio Department of Health’s closure order. Haskell must cease surgical abortions his Sharonville office by Friday, August 22, 2014.

“This is such a huge victory for all who respect life and the rule of law,” said Troy Newman, President of Operation Rescue, which worked with Greater Cincinnati Right to Life to expose Haskell’s abortion abuses. “Haskell had the attitude that he was above the law and deserved to operate under a different standard as everyone else. Today, the law has prevailed.”

Haskell is the abortionist who pioneered the notorious partial-birth abortion method which was banned in 2003.