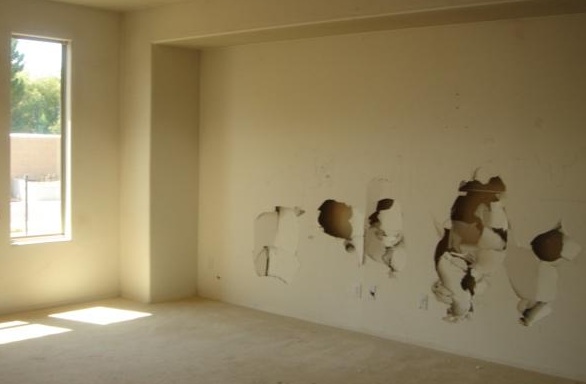 I just got an e-mail from a friend, without salutation. It just began with: “I just smashed stuff with a sledgehammer just now. There was no fear or ambivalence. It was awesome…”

The abortion clinic I used to work for (two decades before becoming pro-life) rented the top half of the second floor a lone two-story office building in the center of a large parking lot, just off a well-traveled highway, less than a mile from the airport. The first floor was a methadone clinic.

At some point during my first year at the clinic, it was determined that more space was needed. The other half of the second floor was rented to the clinic, the tenant sent packing, and permission was granted to join the two sides to double the size of the abortion clinic.

Annexing the other office space wasn’t as simple as just unlocking the door between adjoining hotel rooms; construction crews had to be hired to tear down walls and create a connecting hallway to the other area – to literally break on through to the other side.

I remember reading somewhere – was it in a novel? – about two women who started a small business whose sole purpose was to invite their paying customers into an enclosed room, don safety goggles, and hand them delicate china plates to hurl against the wall. The build-up and release of energy in the act of throwing culminating in the thrill of satisfaction as the fragile plate shattered against the wall. It became lucrative for these brilliant entrepreneurs, as more and more people realized they longed for the freedom that comes from abandoning all pretense of tact and decorum and enjoying the calculated and purposeful destruction of something beautiful.

I had an experience not unlike this the day before the construction crews arrived at the clinic, and the director invited us each to pick up a hammer and smash the flimsy drywall of her old office (slated for demolition in the remodeling plans).

It was awesome – just like my friend wrote in that e-mail, just like those customers must have felt the instant the plate hit the wall.

I can remember the weight of the hammer in my hand, gripping it tightly, and tensing my muscles for that first hit. I was surprised by how easily the drywall gave way beneath even my unskilled (and admittedly weak) swing. It felt great. A few of us smashed together, laughing and singing The Doors’ “Break on Through (To The Other Side)” while we merrily peppered the wall with holes of various sizes and shapes. It felt like a “team building exercise” that modern corporate managers devise to cement staff solidarity. We felt successful (the abortion clinic was expanding!), self-righteous (we can help more women get abortions now!), and a little bit crazy (we’re smashing holes in the wall! How absurd!). Destruction “without fear or ambivalence[,]” like my friend said, felt powerfully intoxicating in a place routinely filled with both fear and ambivalence.

Looking back now, of course, I am awash with quite a different stream of emotions from what I had when that smashing occurred. I Imagine all the willful annihilation of beautiful, irreplaceable life that led the abortion clinic to be flush with cash to double in size, so much more space within which to offer – to sell – death.

Now I pray for the tearing down of mental walls hiding the truth and horror of abortion from those who still clothe their cognitive dissonance in the euphemism of “choice.” Once those walls come down, it really will be as simple as just opening a door to enter the culture of life.

Break on Through (To The Other Side)
THE DOORS