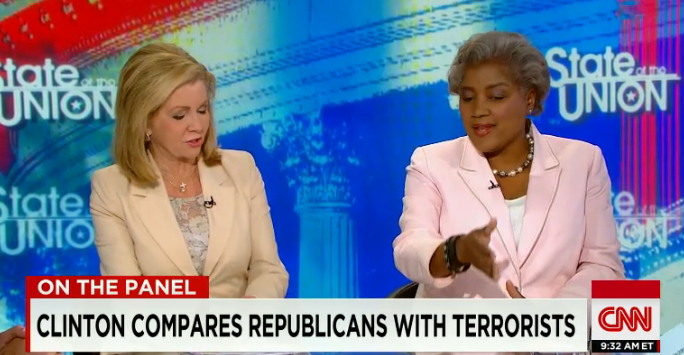 Sunday, on CNN’s “State of the Union,” Representative Marsha Blackburn (R-TN), and Democratic strategist Donna Brazile engaged in a heated discussion on Hillary Clinton and Planned Parenthood. Last week, Clinton made comments likening pro-life Republican candidates to “terrorists.” Rep. Blackburn began by describing Clinton’s remarks as “inappropriate, over the top, uncalled for.” Brazile disagreed, claiming that Clinton was making “a contrast, not a comparison.”

Clinton’s comments were much closer to a comparison than a contrast. According to Merriam-Webster, a contrast is “the act of comparing people or things to show the differences between them.” Not only did Clinton not indicate any differences between pro-lifers and terrorists, she seemed to put them in the same category:

Extreme views about women? We expect that from some of the terrorist groups. We expect that from people who don’t want to live in the modern world. But it’s a little hard to take coming from Republicans who want to be the president of the United States.

After a quick debate on Clinton’s comments, the discussion quickly shifted to Planned Parenthood. Brazile was quick to point out that Planned Parenthood “provides mammogram services,” asserting that “97 percent [of PP’s business] is for non-abortion services.” Though this seems to be a common notion, it is completely inaccurate.

“Go to their website,” Blackburn retorted. “Their main business — they are America’s biggest abortion provider.” Blackburn also mentioned that most Americans are in line with Republicans on this issue. After seeing the undercover videos revealing what Planned Parenthood does in secret (including the sale of human body parts and possible infanticide), many Americans are indeed growing disgusted with PP.

Brazile made a point to attack Republicans’ support for defunding Planned Parenthood, portraying it as a means to denying women proper health care. This too is completely inaccurate. If Planned Parenthood loses federal funding as a consequence of its illegal sale of human body parts, there are thousands of health clinics across the nation which could take PP’s place – and are, in fact, already serving eight times as many people as Planned Parenthood.

Defunding PP does not mean abandoning women’s health. Pro-choice Democrats like Brazile know this, but in an effort to sway public opinion and save face for Planned Parenthood, they twist the facts.

The heated debate – which is actually quite difficult to watch due to constant interruptions on both sides – at least appeared to end on a friendly note, with both women smiling and laughing. “We’re Southern women…” said Brazile. “That’s right… we’re gonna get on the front porch and we’re gonna have this fight,” responded Blackburn.