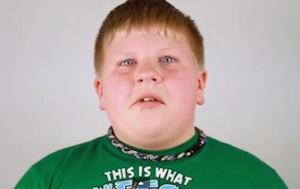 In an endearing video, a young boy is asked by his parents to read a letter to the camera, and they record his reaction to some unexpected news:

The little boy’s response to learning that he is a big brother affirms the precious gift that a child is to a family. Everyone’s identity in a family changes a little bit when they receive a new addition. In this little boy’s case, a son becomes a big brother. He is visibly moved by the news and its impact on his own life.

The culture of death, urging population control, sterilization, and reduction, has an overall negative attitude towards growing families. Margaret Sanger, founder of Planned Parenthood, embodied this outlook in her famous quote, found in her book Woman and the New Race, about killing young members of large families:

Many, perhaps, will think it idle to go farther in demonstrating the immorality of large families, but since there is still an abundance of proof at hand, it may be offered for the sake of those who find difficulty in adjusting old-fashioned ideas to the facts. The most merciful thing that the large family does to one of its infant members is to kill it.

On the other hand, the culture of life embraces the growth of families, and sees it as an overflow of the love that grows so great in families that it cannot be contained unless it spills over into new life. Pope John Paul II, in his 1994 Letter to Families, responded to the outlook of people like Margaret Sanger, explaining that children are a gift to families and to society, and siblings are a gift to one another:

But is it really true that the new human being is a gift for his parents? A gift for society? Apparently nothing seems to indicate this. On occasion the birth of a child appears to be a simple statistical fact, registered like so many other data in demographic records. It is true that for the parents the birth of a child means more work, new financial burdens and further inconveniences, all of which can lead to the temptation not to want another birth. In some social and cultural contexts this temptation can become very strong. Does this mean that a child is not a gift? That it comes into the world only to take and not to give? These are some of the disturbing questions which men and women today find hard to escape. A child comes to take up room, when it seems that there is less and less room in the world. But is it really true that a child brings nothing to the family and society? Is not every child a “particle” of that common good without which human communities break down and risk extinction? Could this ever really be denied? The child becomes a gift to its brothers, sisters, parents and entire family.