An abortionist responsible for a woman’s botched abortion is being investigated by the state of New Mexico. Franz Theard, who commits abortions at Women’s Reproductive Clinic in Santa Teresa, left his business after a woman called to say she and her husband were returning to the facility. When they arrived, they were arrested, but Theard had already left the scene by car just before the couple arrived.

Last month, the pro-life group Southwest Coalition for Life witnessed the arrest of the woman, known only as Jane Doe. Doe had previously taken the abortion pill regimen, which failed. Staff at the abortion facility then convinced her to undergo a follow-up surgical abortion. But days later, the woman discovered that abortion had also failed, as she was still experiencing severe pain. She later “unexpectedly delivered remains of her deceased baby at home.”

Doe and her husband called the abortion facility, which urged her to return and to bring the remains of her child with her. “Coalition for Life staff witnessed Dr. Theard quickly exit the facility, get in his car, and flee the scene,” wrote Coalition for Life in a Facebook post. “Minutes later, the police arrived at the clinic BEFORE the clients arrived. The woman then arrived and entered the facility with a bag containing the remains of her child which she intended to have cremated for burial after receiving medical attention.”

The woman told Coalition for Life, “I had a surgical abortion but it didn’t work! And I’m in so much pain. And they won’t give me no answers. And then they called the cops. I got… I got no answers.”

We are grateful those on the sidewalk during Jane’s arrest following her botched abortion knew to react with compassion over condemnation. #AbortionOnTrial #WeCare pic.twitter.com/OPuy3sViUO

The abortion business staff reportedly refused to return the child’s remains to the woman, and she became upset. Police arrested her and tased her husband when he attempted to intervene on her behalf.

Doe retained pro-life attorney Mike Seibel to represent her, and he filed a letter of complaint with the New Mexico Medical Board. “Doctors are not allowed to abandon their patients,” Seibel wrote in the complaint. “After the surgical abortion, [Doe] called the clinic several times complaining of cramping and being sick. The office staff told her it might be the flu and allowed her to suffer in pain… [w]hen she returned to the clinic, Dr. Franz Theard failed to treat her or refer her for medical treatment, instead he had the police available to arrest her and her husband.”

Abortion on Trial has since announced that the New Mexico Medical Board has opened an investigation into Theard. 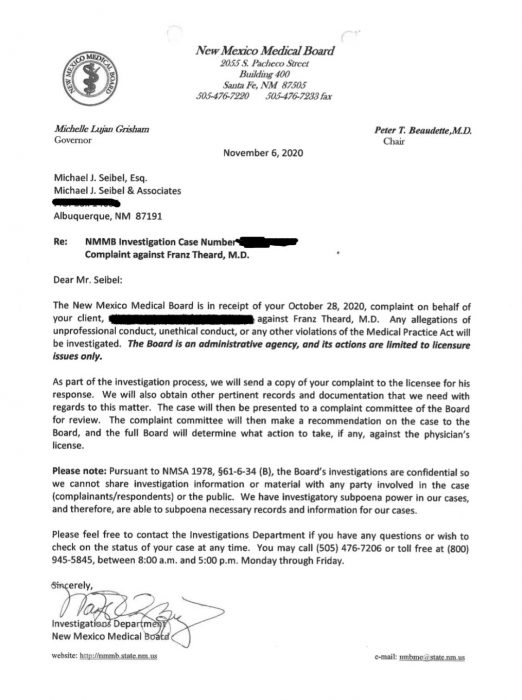 Photo courtesy of Abortion on Trial.

Theard has been sued for malpractice eight times between 1987 and 2003, and is known to have injured women in the past. The body of an aborted baby was also found in the trash outside of his facility in El Paso.

READ: Victim of botched abortion arrested as abortionist flees facility in his car

“The apparent lack of concern shown by Dr. Theard and his staff in this instance is appalling,” Jamie Jeffries, executive director of Abortion on Trial, said in a statement. “Jane wasn’t properly cared for or treated with dignity by this provider. She was mistreated, abandoned, and ultimately arrested on the day she delivered her baby into her own hands. The insurmountable trauma this abortion facility may have just caused this young woman is the exact opposite of empowering her.”