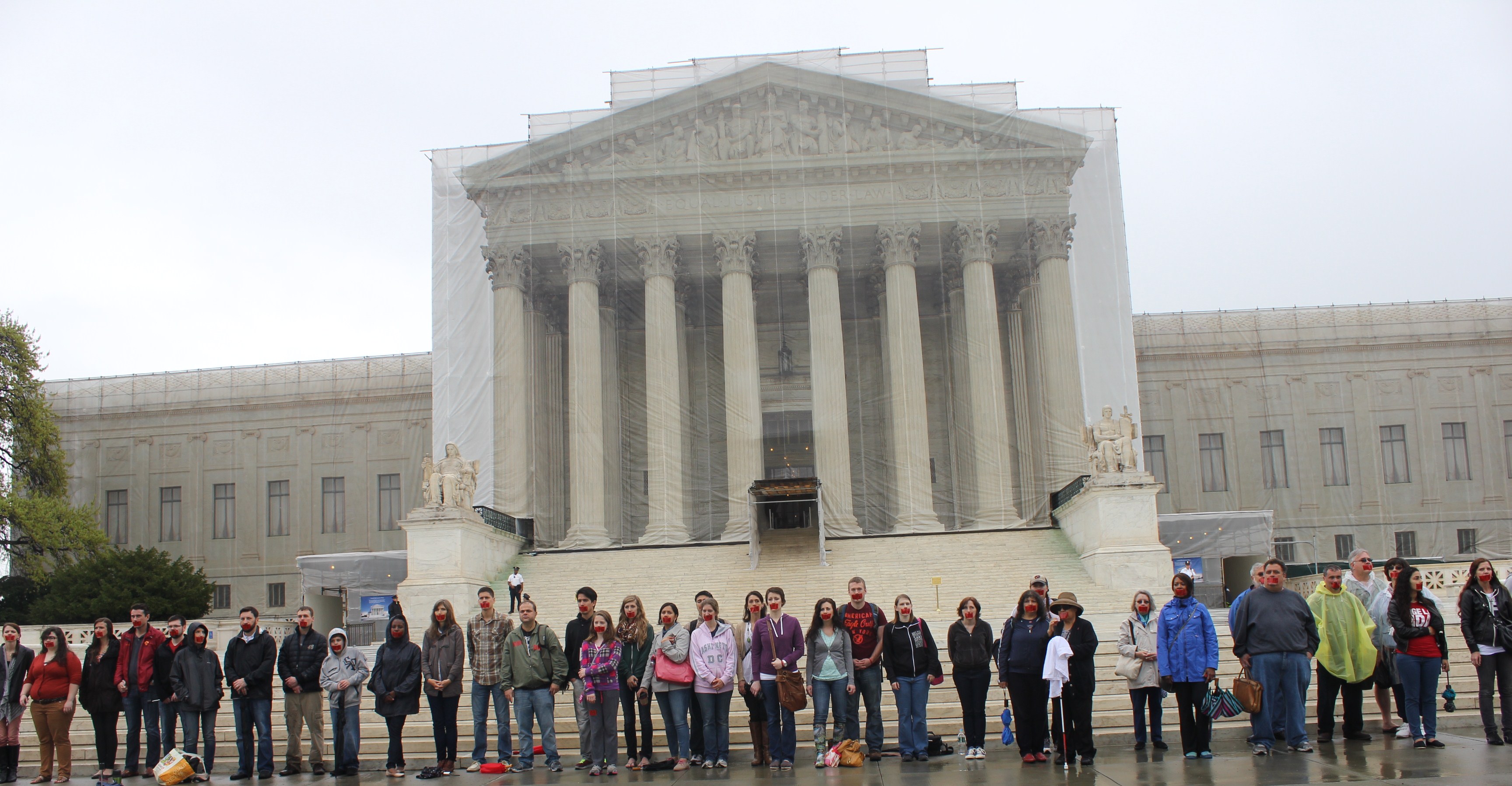 In a culture that’s being ravished by death, will you lift your voice and pray for life? 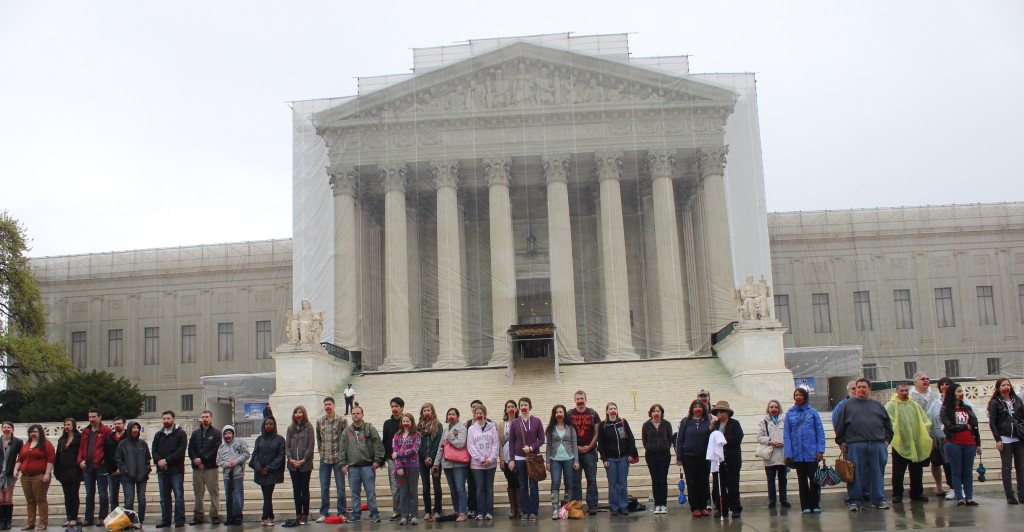 Over a hundred people prayed in front of the U.S. Supreme Court building for the ending of abortion last Friday. The prayer gathering or “silent siege” was part of a conference put on by the Justice House of Prayer D.C. and Bound4Life. I traveled by train to D.C. to join with others from America, Canada, and Mexico who long to see the death toll of the unborn stop rising. As we stood before our nation’s highest court, our silent cries identified with the voiceless babies in the womb.

What we did was not a protest; it was a prayer meeting. With red tape over my lips declaring life, I asked God to have mercy on America.

Just a day after arriving home to Connecticut, I heard the news that tragedy had struck two hours from me. The horrific reports further convinced me that America is in urgent need of authentic and sustained prayer. From the shocking bombing at the Boston Marathon to the plant explosion in Texas, citizens in our country are crying out for help.

In 2006, under the leadership of a pro-life warrior named Lou Engle, a company of people camped out in Boston to pray in shifts, 24/7, for the ending of abortion and an awakening on college campuses. We joined the Justice House of Prayer Boston and prayer-walked Harvard and held worship meetings in a nearby church. We petitioned God to send revival like in the historic first and second great awakenings. We repented for the shedding of innocent blood and prayed that God would annul America’s covenant with death. It wasn’t easy sleeping on a church floor in the dead of winter, abstaining from meats and sweets, or waiting for a van to take us to shower at a Korean church down the street. Nevertheless, those were glorious days of intercession.

Prayer is the ultimate strategy to see reformation and transformation in a society. So many of us agree that prayer is powerful, talk about praying being needed, but how often are we actually praying? If we don’t bow our heart and bend our knees in times of crisis, will we ever?

Martin was an 8-year-old boy who lost his life in the Boston bombings. His 6-year-old sister and mother were also injured in the attack. This breaks my heart. I am pro-life. I hate to see violence stealing the lives of children. We in the pro-life movement are committed to protecting life, from birth to natural death. Whether it’s the bloodshed of abortion or the bloodshed brought on by terrorism, we oppose these forms of violence that bring death.

The question is not should we stand, but how do we stand? I say we stand by falling down. We stand by repentance for the bloodshed of abortion in our land. We lift our voices before heaven and open our mouths in the public square, declaring that we will not sit idly by while our children are dying on the streets. 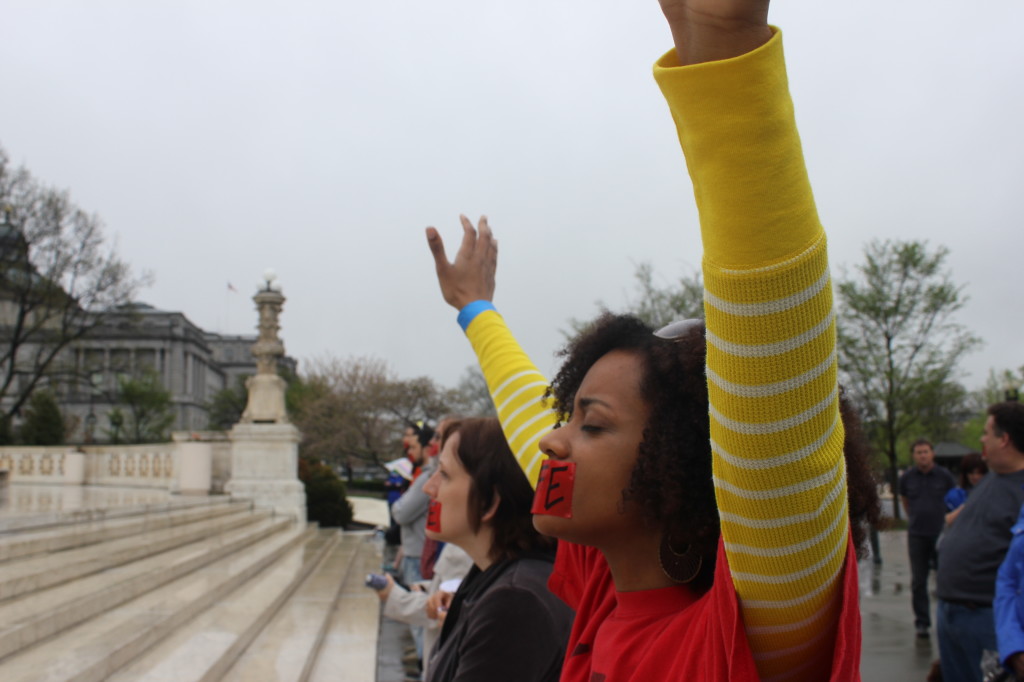 Praying at a Bound4Life “silent siege” in front of the Supreme Court.

I’m not jumping on the prayer bandwagon because another crisis has occurred. I am calling for prayer because it is the wisest thing we can do in this hour. Abraham Lincoln believed that prayer is essential in the shaping of our country. Lincoln’s writings reveal his opinion that the Civil War was a judgment of God because of the sin of the American people, particularly in regards to slavery. In a March 30, 1863 Proclamation for a day of prayer and fasting, Lincoln wrote, “It behooves us then, to humble ourselves before the offended Power, to confess our national sins, and to pray for clemency and forgiveness.”

One month later, on April 30, 1863, American citizens heeded the call and observed the day of fasting and prayer. April 30, 2013 is coming quickly. What if we followed in the footsteps of Lincoln by gathering friends and family members and crying out to God on behalf of our nation? What if we didn’t even wait for a specific day, but rather began to pray right now? 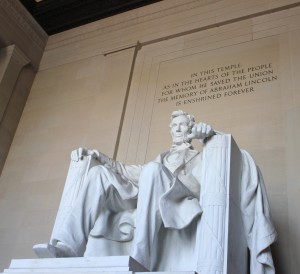 After the Newtown shootings, I took a trip to visit the town and pay my respects. On a shop window I saw a large sign that simply said, “Pray for Newtown.” It was sobering. How many more signs do we need to see? I don’t want another tragic reminder of the state our nation is in. I see it clearly. News reports reveal that one suspect in the Boston bombings is dead and that the other one has been captured. The people in Boston are celebrating, and rightly so. Yet in the midst of celebration, may we remember that our nation is still in desperate need.

The time is now to humble ourselves and pray for our citizens, our government, and all our land. The book of Ezekiel, Chapter 35:6, says, “ I looked for a man to stand in the gap on behalf of the Land.” In a culture that’s being ravished by death, will you lift your voice and pray for life?