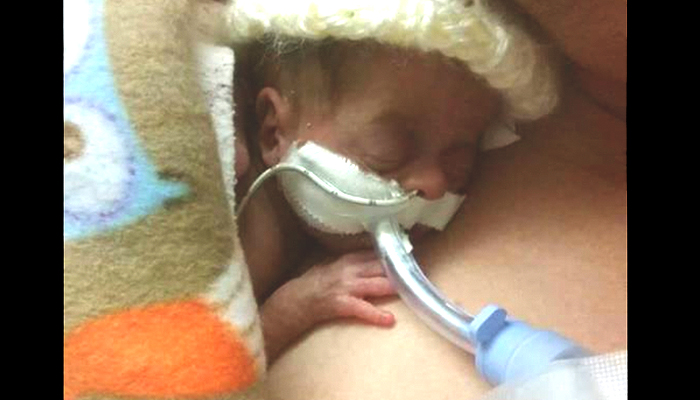 On March 9, 2017, Baby Ariana was born after an induced labor at Anne Arundel Medical Center in Maryland. But this was no ordinary induction — Ariana’s mother, Claudia Cruz, was just 24 weeks pregnant. While survival rates for extremely premature babies like Ariana are improving, it is still dangerous. But Ariana is a miracle baby who now, a little over four months later, is healthy and strong enough to go home.

Halfway through her pregnancy, Cruz went to a routine check-up, where it was discovered that she had gestational hypertension, or extremely high blood pressure. For her own safety, her medical care team induced labor, despite knowing how risky it would be for Ariana. With modern medical advances, there was still a chance the tiny baby could also survive.

When Ariana was born, she wasn’t breathing. But Cruz and Ariana’s father, Oscar Gutierrez, decided to have her resuscitated, even though they knew there was no guarantee their daughter would make it. “We felt like we wanted to die,” Gutierrez said. “But, now that we’ve thought of it, it was the best decision we made. Truthfully, when they told us the baby could die, our life changed completely.”

Now, Ariana weighs four pounds, 15 ounces. She is finally able to go home, and she’s the smallest baby ever born at Anne Arundel Medical Center who has survived.

Dr. Suzanne Rindfleisch, director of the neonatal intensive care unit, said that Ariana’s family’s willingness to fight for their daughter played a huge role in Ariana’s ability to survive the obstacles in front of her. “She was our smallest survivor,” Rindfleisch said.

She was 12 ounces and dropped to 8 ounces. It was a long and difficult course for her, but she has a bright future ahead. Being at 24 weeks gestation, all the issues of a premature birth were there with the placement of tubes and monitors. She had transfusions and intubations. Her head sonogram was normal, though. And her parents were by her side all these months.

The family involvement was crucial. The attention they gave her and how they fought for her.

But what happens if other parents aren’t willing to fight for their babies? Unfortunately, in Maryland where Ariana lives, babies just like her can be aborted at any time. The most frequent method of abortion for second-trimester babies the same age as Ariana is dilation and evacuation, or D&E. Former abortionist Dr. Anthony Levatino explains the procedure in the video below. (Other abortion procedures are described in the videos available here.)

Abortion is a cruel, painful, violent, and horrifying way for a child to die. At this point in pregnancy, it’s been proven that preborn babies are capable of feeling pain, though some studies indicate babies may feel pain as early as 5.5 weeks. The baby can hear, and she has eyelashes and hair. Twenty-four weeks is when preborn babies are widely considered to be viable — able to live outside the womb. But even that ability should not determine whether a child is allowed to live or die. Moreover, medical advances mean that viability continues to move earlier and earlier in pregnancy. Science has also made it clear that every preborn child is a human being from the moment of conception.

Every baby deserves the right to live her life, no matter how small or frail she may seem to be — and even if she drops down to only eight ounces like Baby Ariana.