It is safe to say that many people do not really know much about abortion; some are not interested in knowing, some are indifferent to the concept, and others who even promote it or label themselves pro-choice don’t know what abortion procedures actually do, either to the woman or to her baby.

Brian Fisher, author of Abortion: The Ultimate Exploitation of Women, says regarding his book, “The number-one comment I got… from both men and women, was: ‘I just didn’t know. I didn’t know the history of abortion, men’s role in spreading it, and the degree to which it has ripped apart the fabric of the American family.’” 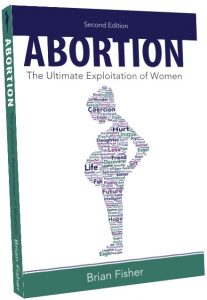 This book exists to educate those who want a deeper understanding of the issues surrounding abortion – the causes, the spread of it, the implications of it, and ultimately, how it can even be ended.

In his book, Fisher outlines many different aspects that all affect how abortion has become what it is, from past and current legislation, to the social implications of the effects of abortion on women, as well as on a whole culture. He explains how abortion is bigger than “just a woman’s issue,” challenges the legality behind abortion, and puts into context mens’ roles and mindsets that have led to harmful things for women, one of which is abortion. Interestingly, much of the book focuses on men to more fully explain their involvement in what is portrayed as a women’s rights issue.

Fisher paints a comprehensive picture of how the objectification of women – from rape, to trafficking and slavery, pornography, and violence – have all aided in the ultimate ending of unwanted pregnancies through abortions. Abortion: The Ultimate Exploitation of Women ends with a plea for men to help in turning the culture of abortion into a culture of life, and lists some practical ways in which to do this.

For more information on Abortion: The Ultimate Exploitation of Women, please visit AbortionExploitsWomen.com where this book can be purchased in both paperback and E-book formats. This book acts as an accompaniment to the men’s resource center found at AbortionExploitsWomen.com, where additional sources exist to “equip men to fight for life in a sex-obsessed culture which has accepted abortion as ‘a women’s issue’… As with many other social injustices, abortion will not end until men stand up for both the lives of the innocent and the mothers in crisis.”

(A second edition of this book has recently been released with the addition of many new and updated sources.)