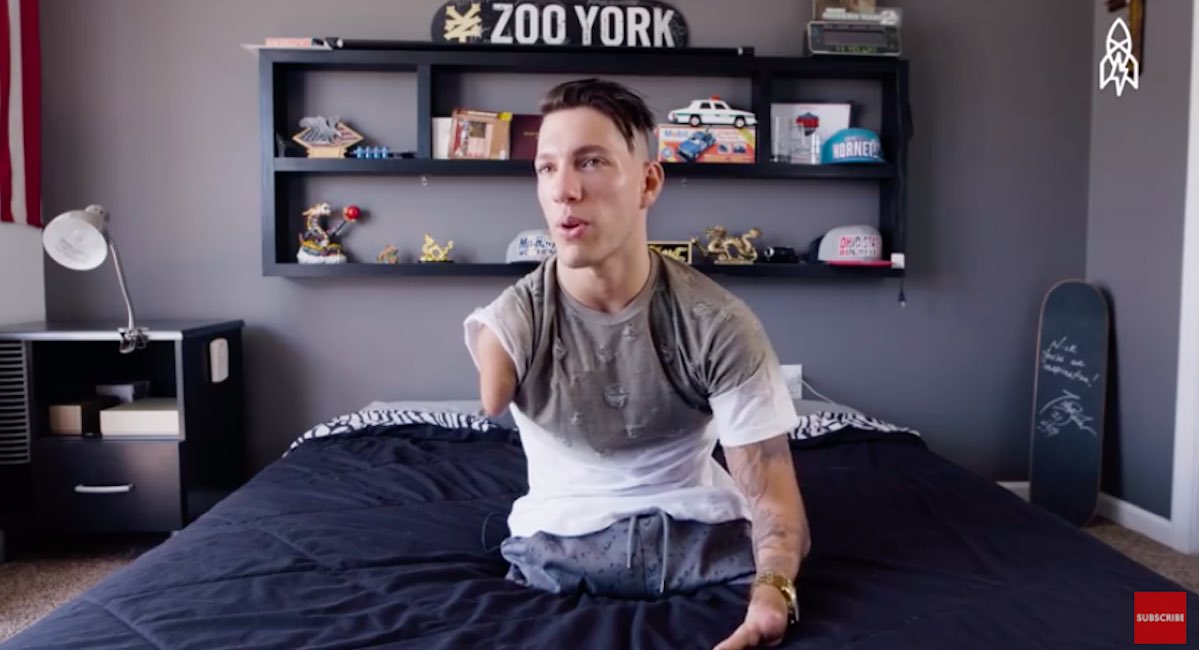 Nick Santonastasso is a bodybuilder from New Jersey. Given that, his quote, “Living a healthy lifestyle is not as hard as you think it is, especially if I can do it,” might sound run-of-the-mill… until you see one of his videos.

Santonastasso is one of four known people in the world living with a chromosomal condition called Hanhart syndrome, which manifests as undeveloped internal organs or limbs. In Santonastasso’s case, he was born healthy but was missing legs, and he has just one arm with one finger. Those realities led to understandable struggles — even suicidal thoughts — during his middle school years as he questioned why he wasn’t like the other kids.

Ultimately, though, the same things he lacked fueled his interest in both bodybuilding and inspirational speaking. In high school, he joined the wrestling team, and couldn’t understand why people would cheer when he lost. Over time, he realized that by showing up each meet with what he did have, he was encouraging others to do the same. He went on to pursue bodybuilding, initially drawn to the persona of muscular guys with fast cars doing incredible things in the gym. Now, he uses his passion for fitness to show others that by embracing failure rather than shrinking from it , they can grow to reach their goals. “I look at motivating and inspiring (people) as a duty,” says Santonastasso, now 23.

Through his Instagram account, Youtube videos, and speaking engagements, he reaches people all over the world. One mom in the UK wrote to him that one of her children had to have his leg amputated. He watched Santonastasso’s videos and told his mom, “He’s like me, mom. He’s like me.”

Santonastasso strives to be a role model for others, so that when they say, “I don’t know how to do this,” they can they say “let me look at Nick’s page.” He’s also written a song specifically to combat suicide:

Santonastasso could easily have become a statistic, given that typically, our society looks down upon personal limitations. We abort children with Down syndrome or other life-limiting or life-altering diagnoses at alarmingly high rates. Nick Santonastasso’s story challenges that narrative. His parents told the TODAY Show in 2014 that they learned about his condition while his mom was in her third trimester. His dad said, “We figured, let nature take its course, and we would prepare our children for what their brother would be and put it in God’s hands.”