The head of the National Institutes of Health (NIH), Dr. Francis Collins, recently suggested that because aborted children are already dead, it is ethical to use their bodies for experiments in fetal research. In an interview with the Washington Examiner, Collins excused the grisly research, suggesting that using the bodies of deliberately slaughtered children might “save a life someday”:

I do think that part of the argument has been missing a little bit in the fetal tissue debate: the sort of immediate assumption that if you’re in support of fetal tissue research that you must also think abortion is just fine…Even for people who are pro-life, who are troubled by abortion, the use of fetal tissue for research, since they are being derived anyway, if that is going to save a life someday, seems like a credible stance.

Collins added, “To take the results of that termination and discard it, versus trying to come up — in rare instances — for some kind of research application with full consent, seems to me like a totally ethical stance.”

Sadly, we have heard this type of justification before during other atrocities.

Dr. Hans Münch was a Nazi research pathologist at an institute near Auschwitz who gave interesting insight into the mindset of the so-called “Angel of Death,” Nazi doctor Josef Mengele. Münch told an Australian television outlet, recounted in an article published by the Montreal Gazette, that he did not believe members of Hitler’s Nazi party were forced to do “what they did against their will.”

Asked if he was fully aware of the gassing being carried out at the concentration camp, Münch replied, “Yes…One was always aware of the smell of burning. Everyone for miles around knew about it.” He noted that at times he could hear the death moans of the victims, which he called “a sound like no other.”

Münch eventually presided over a team of prisoners who were scientists at Auschwitz, most of them Jews. Survivors testified that Münch, “treated us as human beings.” He admitted that he carried out immunization experiments on prisoners, which he claimed were “totally harmless,” enabling prisoners to receive “supplementary rations.” But Münch insisted he was not fully aware of the ghastly experiments carried out by the Nazis, specifically those by Josef Mengele.

According to Münch, Mengele justified his experiments this way:

Münch was dubbed the “Good Man of Auschwitz” and was eventually acquitted of war crimes after several former prisoners testified on his behalf.

Today, scientists with the taxpayer-funded NIH promote experimentation on tiny bodies of human persons whose lives were taken by the brutal, violent, willful act of abortion. Director Collins has doubled down in defense of fetal research, vowing the experiments using the bodies of these children “will continue to be the mainstay.” Is NIH Director Collins’ ideology really so different from others who considered yet-living human beings as guinea pigs for experimentation?

But research using these children, say others, is unnecessary. There are truly ethical and life affirming means of research, recently detailed by Dr. Tara Sander Lee before a Congressional panel on the subject:

In her book Medical Apartheid, author Harriet Washington writes, “Enslavement could not have existed and certainly could not have persisted without medical science. However, physicians were also dependent upon slavery, both for economic security and for the enslaved ‘clinical material’ that fed the American medical research and medical training that bolstered physicians’ professional advancement.”

One example of this is Dr. Marion Sims, once hailed a hero, despite the fact that he performed medical experiments on Black slaves with no anesthesia and no consent. You see, Black slave girls were mere “property,” so no consent was necessary. As Live Action News previously documented, the medical community ignored Sims’ past and collaborated to pay tribute by erecting statues in Sim’s honor. But, despite deliberate blindness from the medical community, recently enlightened public demanded the Sim’s statues be removed.

As mere “property,” even a dead and buried slave became a treasure trove for medical body snatchers to dig up. A descriptive account from the book, American Slavery As It Is: Testimony Of A Thousand Witnesses, by American Anti-Slavery Society gives us insight: 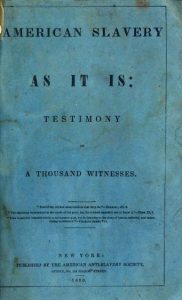 American Slavery As It Is Testimony of a Thousand Witnesses

[T]heir graves may be ravaged, their dead may be dug up, dragged into the dissecting room, exposed to the gaze, heartless gibes, and experimenting knives, of a crowd of inexperienced operators, who are given to understand in the prospectus, that, if they do not acquire manual dexterity in dissection, it will be wholly their own fault, in neglecting to improve the unrivalled advantages afforded by the institution–since each can have as many human bodies as he pleases to experiment upon–and as to the fathers, mothers, husbands, wives, brothers, and sisters, of those whom they cut to pieces from day to day, why, they are not ‘individuals in the community,’ but ‘property,’ and however their feelings may be tortured, the ‘public opinion’ of slaveholders is entirely too ‘chivalrous’ to degrade itself by caring for them!

Experiments deceased aborted babies and even abortion survivors have gone on for years. Live Action News previously documented how living abortion survivors were shipped to researchers on ice, how some were kept alive for almost a day while researchers cut open their chests to watch their hearts beat, and how taxpayers have been forced to fund experiments on aborted children for decades.

There is no result that can justify using fetal body parts for experimentation. It is neither ethical nor moral. As long as human beings are viewed as property, those who profit from their bodies will ease their consciences by claiming humanity will benefit.

History teaches us that this is immoral and evil thinking, and it should be condemned.