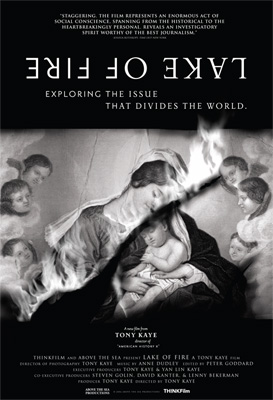 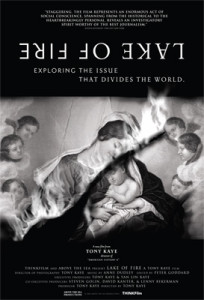 “There are still things I need to do before I have a child, like finish college, and have a job … and a marriage.” The camera doesn’t show her face. The rumbling machine makes a sudden scream, like the sound of a drill bit when it comes to a screeching halt.

“In just a few minutes, we’re able to facilitate her decision to not be a parent,” the doctor says jauntily. “Now it’s just a matter of piecing the fetal tissue back together.” He sifts through the machine’s contents, holding up a tiny human arm, a splintered leg, and a ghoulish head. The bulging, empty eyes stare into the camera.

Yes, Tony Kaye’s Lake of Fire is graphic. Shot entirely in black and white, the grayscale film only mutes the viewer’s horror. But this documentary isn’t so much about abortion as it is the people who care about abortion.

Just because Kaye never speaks during the film’s 152 minutes – the narrative lumbers along through a combination of interviews and archival footage shot over the course of 16 years – doesn’t mean he has nothing to say. Repeated juxtapositions of religious imagery and spiritual rhetoric are not so subtle suggestions that abortion wars transcend the political.

Lake of Fire fetishizes zealous fundamentalists on both sides. Pro-choice activists are seen carrying a cross emblazoned with the words “cross of oppression, keep abortion legal,” and shock-rocker femmes fatales perform vulgar acts with coat-hangers. Most of the film follows anti-abortion activists who perceive themselves to be vehicles of God’s wrath upon abortionists. The interview subjects that Kaye chooses betray his interest in militant subculture, a fascination he carries over from his previous work, American History X, which examined neo-Nazi skinheads. Unfortunately, this approach unjustifiably paints the entire pro-life movement with the brush of violent extremism. (In reality, the vast majority of pro-life Americans oppose all abortion-related violence.) But the film also shows how ugly abortion is, which casts the vigilantes in a more sympathetic light. Kaye rightly acknowledges that the violence of abortion provokes violent responses, even though those responses are just as morally unjustifiable.

Though Kaye claims neutrality on abortion, his inclusion of a clip from “The Hard Truth” may reveal the motivation for his graphic documentary. “Some might ask why a video of this sort should even be necessary,” the clip’s narrator says. “Teachers don’t show bloody World War II footage to manipulate students emotionally; they use it because the Nazi death camps represent an evil so inexpressible that lectures alone could never adequately describe it. Until you’ve seen the pictures … you can’t begin to know how evil it is.”