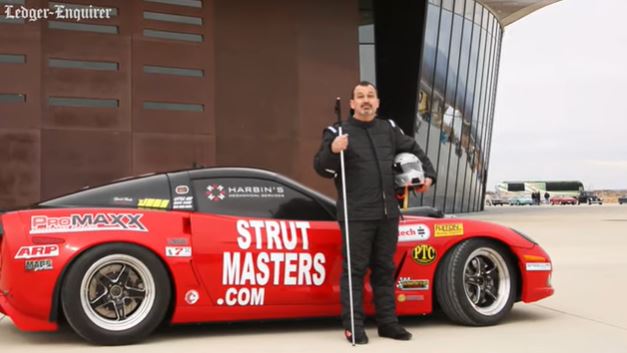 A blind drag racer is living proof that having a disability doesn’t have to hold someone back or make their life any less worth living. Dan Parker was a world champion in his sport — until 2012, when a horrific crash destroyed his eyesight. After overcoming depression, Parker decided to pursue his dream of racing again, successfully setting world records along the way.

On his Facebook page, Parker said that his survival and rehabilitation alone exceeded everyone’s expectations. But he had another dream: to race on the famous Bonneville Salt Flats. “After the accident, I thought that dream was over,” he wrote. “Then it came to me one night in bed that I could do this. Losing my eyesight did not have to stop my goals and dreams.” So with sponsors, a lot of hard work, and the help of friends, he created a land-speed trike that was completely unique.

“At first the officials at the BUB motorcycle speed trials were a little apprehensive when I first called inquiring about my project,” Parker told The Drive. “After we formed a relationship they realized I was serious and a professional racer and put my skills and guidance system to the test in a special course. The officials told me if it were not for my past racing history, willing to work with officials, and my professionalism, they would not have considered letting me race.”

In 2013, his dream was completed: he successfully raced the Bonneville Salt Flats, becoming the first blind man ever to do so. But he later learned another blind racer, Mike Newman, had set a world record for the highest top speed attained on land. Beating that record became Parker’s new goal — and on an episode of “Jay Leno’s Garage,” he achieved it.

For this run, Parker used a modified 2008 Chevrolet Corvette, which a friend of his from Boeing helped design. “My guidance system is based off GPS,” Parker explained. “The officials give us access to the course before the races start every day. We plot the centerline. If I go 1 foot off-center I get a tone in that ear. The further I go off-center the tone increases. If I went 20 feet either way off-center it would shut off my bike. It also shuts off the bike when I crossed the finish line, and my engineer can remotely shut me off from the chase vehicle.”

During last week’s episode, Leno came along for a ride, with his signature sense of humor. Parker laughed out loud as Leno joked, “I’d say let’s see what happens, but that would be inappropriate!” After Leno exited the vehicle, Parker began his record-breaking run, reaching a speed of 152 miles per hour, making him the fastest unassisted blind driver in the world.

READ: Record-breaking swimmer: ‘Down syndrome is a life worth saying yes to’

When he was told he had broken the record, a clearly emotional Parker applauded, pounded on the steering wheel, and laughed, before exclaiming through tears, “Hell yeah, everybody!” His excitement and joy were so intense, he forgot about Jay Leno completely, having to ask again who was there. “It’s Jay, remember me?” Leno joked. “Boy, they break a record, and they forget who you are!”

Parker’s incredible accomplishments disprove the cultural narrative that disability is something worth dying over. People with disabilities are often viewed with pity and condescension, with snuff films portrayed as romance, and people eager to fund their euthanizations. But life with a disability is still a life worth living — and it’s not only a valuable, fulfilling life, but it can be one where someone can do amazing things, as Parker so fantastically shows.