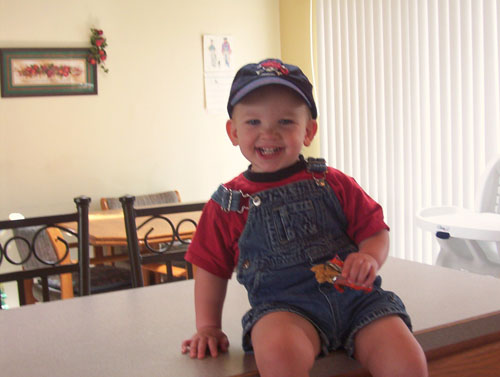 I thought I’d be pregnant forever, but keeping the baby was the best decision I could possibly have made.

I peed on the test stick and waited for a minute. The test was positive? What…how could this be? It was our first time together – that doesn’t happen on the first time!

My cousin Tara came in the bathroom. “Michelle, how are you doing?” I said there is something wrong with this test, I think I need another one. She said, oh, OK! I have another one in my drawer. But I don’t have the instructions with it. I said, well, give it to me. With all the muscles in my body, I managed to squeeze out about 10 drops more. I waited…the test had a circle…was that positive or negative?

My instincts said that that “o” meant “positive,” but I wasn’t sure, or maybe didn’t want to be sure, so I drove back to the market, sure now that both tests were wrong. I bought a twin pack of pregnancy tests. I went back into Tara’s bathroom and took another one…waited…this one had a plus sign! I shouted out the bathroom to Tara: “Hey, Tara…this one said positive! I think all these tests are messed up.”

Tara came in the bathroom. She said, “Hmm…well, that’s weird! Why don’t I take one and see what it says? Then maybe we can get a happy medium between them.”

I had enough sense to realize that I was in fact pregnant. Laughing at our denial, and because I didn’t know how else to react. I was in shock! I had only just been divorced for one year from a sixteen-year marriage, with three children that I already felt like I was having a hard time providing for. And now I was pregnant with a fourth child? I cannot take care of another child, or bring another child into this world, especially without being married! What would my family say? They don’t even know I have been seeing Chris. And do I even want to be with this Chris forever?

That night, I had a dream that my son Daniel, who was six years old at the time, was killed. In the dream, it was something that I allowed to happen, like I wasn’t watching him and he was killed. I woke up crying because the dream seemed so real, and I realized that I had my answer: killing my baby in my womb would be like killing my son Daniel. My baby, just as Daniel, is my son! He is a child.

I was very sad because I knew what I had to do; I knew that I would protect this new baby in my body and not let any harm come to him. But my flesh didn’t want to face what was next: telling my family and children, and my friends.

I decided that it would be best to first tell my baby’s father that I was pregnant. I went to his house, and he answered the door. We went to the couch and sat down. Chris’s house was kind of dark, and had a sort of bachelor guy theme to it. We talked the small talk for a bit ’til I could think of a good time to say it, and of the words to tell him. There wasn’t a good time, so I just took a deep breath and spat out the words: I am pregnant!

A confused look came over his eyes. He didn’t look very happy – he had just come from a divorce as well. He said, “Why don’t you get an abortion?” I said, “I can’t – I don’t believe in abortions! As much as I would like to right now, I couldn’t live with myself if I did.” Chris said,
“Well I will stand behind you in any decision you make.”

I grew up in Stayton, and I had lived there for thirty-two years. I have a very large family, and my grandpa was a very successful businessman who owned half the town. It seemed that everywhere I went, I ran into friends and family members.

It was getting obvious that I was pregnant; I could no longer hide my belly underneath big sweaters. I did not want to tell my family because I already had just got through a year of people talking about me getting divorced, with everyone lecturing me and scolding me, telling me what I should do and shouldn’t do. You have the know-it-alls and the do-gooders who think they know all about your situation. I was so tired and beaten down from the divorce that I didn’t have the energy to be in the spot light again, and it was none of their business anyway. I didn’t have to tell them! So to save face, I moved out of town. I moved about forty-five miles south of town, but it was far enough away that the chances were small of running into anyone I knew.

I decided I had to quit my real estate position and get a job where I could have insurance to cover my delivery. This meant that I had to tell my boss what was going on and resign from real estate. I was so mad inside; I had finally got free of a divorce and was finally getting back on my feet. Now this!

I remember that I prayed: “Lord, I will do this, but I’m not going to like this!” Looking back, I see how selfish I was – I wanted to live life the way I wanted! This child was not in my plans! I went to my boss – a principle broker and owner of a successful real estate company who also happened to be a worship pastor at a local church – and cried at his desk. I told him how I was pregnant, and how I needed insurance, and how I couldn’t get it being a realtor. So I had to resign! He said, “I understand! I know things seem overwhelming right now, but I just want to tell you about a story of some friends who were finished having children. Then they discovered they were going to have another child, and that child was the best kid out of all the children they had together.” That made me feel better, knowing that God might possibly turn something I did wrong into a blessing.

It wasn’t easy, though, and I hated the next five months. It seemed like I would be pregnant forever, and sometimes I would recall how my older brother Aaron had handled things when he was young. He had had a girlfriend whom he dated all through high school. He got her pregnant two times in those four years, and they had got two abortions. I remembered back at how angry I was at my brother at that time for not standing up and having those children. I would think, how could anything be so bad in life to have to kill a baby? Well, now I understood how he felt! I understood the fear, the shame, the changes that would happen.

I told my older brother that I was pregnant; I knew he would understand. He actually was good friends with Chris – we had all gone to school together. I told Aaron that I wasn’t going to get an abortion, and he said, “You’re darn right, you’re not!” I saw tears welling up in his eyes as he continued: “That’s when your problems would start!” Aaron said, “My oldest son would be twenty years old now, and the second child would have been eighteen. There is not a day that goes by that I don’t regret those decisions. I was young and dumb, and I know I will have to answer for it someday.”

I had been through this three times before, and all with a husband who didn’t care. I was so angry inside! Now I was alone, but being alone wasn’t as bad as I thought it would be, because I wasn’t let down. There was no one there to blame! All the tasks you expect your husband to do…but this time, there were no expectations! So there was no let-down.

Chris had lied; it turned out that he was very angry that I didn’t have an abortion. I didn’t talk to him again until after the baby was born.

The day I went to the hospital and had Adam, the doctor held the baby up in front of me, and I felt all anger leave my body. I felt overwhelming love for this white, fat, healthy baby. He looked nothing like my previous three children. I just wanted to hold him – he was so precious!

I called Chris and told him I had just had his son. He asked if he could see him, and I said, “Sure!” He came to the hospital the next day, and when he walked in and set eyes on his son, he started crying. He looked at Adam, and love overwhelmed his face. With tears welling up in his eyes, he told me how sorry he was for how he acted, and how he wants to be a part of Adam’s life.

It was a slow and steady process, but Adam sees his dad routinely and loves him very much. Adam will be six years old next month. He is very funny and intelligent, and he has brought so much joy to so many people already. He’s such a cool kid.

That time in my life seemed almost unbearable, but what I realized is that it’s all just a season. It shall pass, and life goes on.