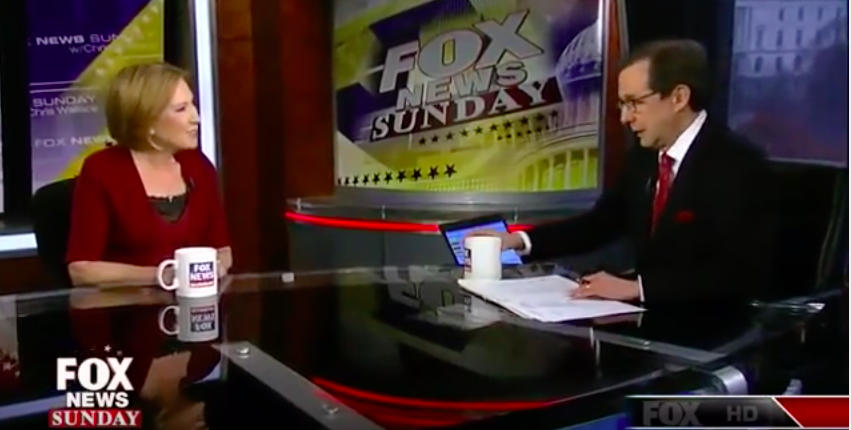 Last Sunday, Carly Fiorina appeared on Fox News Sunday, where host Chris Wallace brought up the Colorado shooting and asked Fiorina’s thoughts. A transcript from Fox News of the relevant segment shows her statements were firm and principled, but also respectful and on point…

WALLACE:  Your reaction to the shootings at that clinic in Colorado Springs?

FIORINA:  Well, this is a tragedy.  It’s obviously a tragedy.  Nothing justifies this.  And presumably this man who appears deranged, if nothing else, will be tried for murder, as he should be.  But it’s a tragedy, especially on a holiday weekend.

WALLACE:  You have been one of the toughest critics, as we’ve said, of Planned Parenthood’s alleged harvesting of body parts, selling for fetal research.  Some of the pro-choice advocates are saying language like yours, not single you out, but language like yours, has incited violence.  I’d like to get your reaction to that.  But also, what would you say to protesters, people outside these clinics, about the limits of their opposition?

FIORINA:  Well, first, it is not alleged.  Planned Parenthood acknowledged several weeks ago they would no longer take compensation for body parts, which sounds like an admission that they were doing so.

Secondly, this is so typical of the left to immediately begin demonizing the messenger, because they don’t agree with the message.  The vast majority of Americans agree, what Planned Parenthood is doing is wrong.  That’s why the vast majority of Americans are prepared not only to defund Planned Parenthood, but also to stop abortion for any reason at all after five months.

So, what I would say to anyone who tries to link this terrible tragedy to anyone who opposes abortion or opposes the sale of body parts is, this is typical left-wing tactics.

WALLACE:  And what would you say to the protesters, the people that are outside the clinics and oppose it?

But right away, some media outlets turned to twisting Fiorina’s words to make headlines. Many seized upon her use of the term ‘left-wing tactics,’ perhaps because they had little else to go on.

RawStory grasps for any form of criticism it can find, mentioning that “Fiorina did not address comments made by the Colorado Springs Planned Parenthood shooter, Robert Lewis Dear.”

Here are some headlines from others:

In what way can an objective person say that Fiorina referred to the shooter, Robert Lewis Dear, as merely a protester? Stassa Edwards, author of the Jezebel piece, never actually explains this claim – probably because she can’t. It’s just the dirty trick of manipulating someone’s statements to suit your own agenda. When we consider Fiorina’s actual statements, she very much condemned Dear’s actions.

Chris Matthews host of Hardball on MSNBC, even suggested that Fiorina “enjoy[ed]” the shooting.

This is why providing full context is so important and crucial, at least for those who seek to be honest journalists. Shamefully, it seems that those at Jezebel and other sites operate according to their own agenda and biases.