The difference between a person and a message.

Beyoncé and her husband Jay-Z have a history of publicly commenting on their love for unborn children. Beyoncé’s documentary Life is But a Dream reveals her miscarriage story and the subsequent feelings of loss that she experienced after having loved the child in utero, and stated that his or her heartbeat was “the most beautiful music” she had ever heard. Jay-Z hinted at his post-miscarriage pain in his song “Glory.”

Most recently, Beyoncé told Shape Magazine that spending time on her boat reminds her how small she is, and that “[i]t’s the closest thing I can imagine to feeling as vulnerable as a child in the womb.” 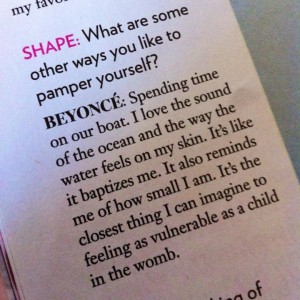 Do statements like these make Beyoncé, or any celebrity, “pro-life”? No, not necessarily. But some values are pro-life regardless of who shares them. Pro-life means respecting the dignity and value of life at all stages of development, from fertilization to natural death. Any statement that aligns with that view is pro-life.

For example, my recent article about Ed Sheeran’s song Small Bump attracted droves of criticism from readers who thought that, in the article, I was labeling Ed Sheeran “pro-life” or “anti-abortion.” That is not the case. As those who actually read the article carefully readily understood, my premise was that Sheeran’s song is a beautiful depiction of a man’s love for an unborn child, and as such, the message is pro-life. Why? Because “pro-life” is not just “anti-abortion.”

Last week, we talked about the importance of the language we use when sharing our pro-life values. In that article, I observed a common mislabeling that pro-lifers often receive:

The media tends to refer to pro-lifers as anti-abortionists. This term doesn’t acknowledge the entirety of our message, however. Our stance against abortion stems from our respect for the dignity of life. We are against all forms of disrespect for life, including euthanasia, abortion, and discrimination against the disabled. Therefore, it is more accurate for us to be referred to – and to refer to ourselves – as “pro-life,” or “life advocates.”

This is something that the pro-abortion community often misinterprets about our stance: they see pro-lifers as rabid anti-abortion zealots who crusade against women’s rights for religious and political reasons. (Think I’m exaggerating? Just read some of the comments on the article. Pro-lifers are called “freaks” and “insensitive,” accused of furthering a political and religious agenda simply because we acknowledge the pro-life values in a song about how beautiful an unborn baby is.)

Back to Beyoncé: while her occasional comments about the beauty of unborn life, or her recognition of its innocence and vulnerability may not make her a pro-life activist, the comments themselves are pro-life because they convey the values that the pro-life movement works to further every day. The root of our identity as pro-lifers is that we promote the dignity of every human life from fertilization to natural death, and anything that affirms those values is, in its own way, pro-life.