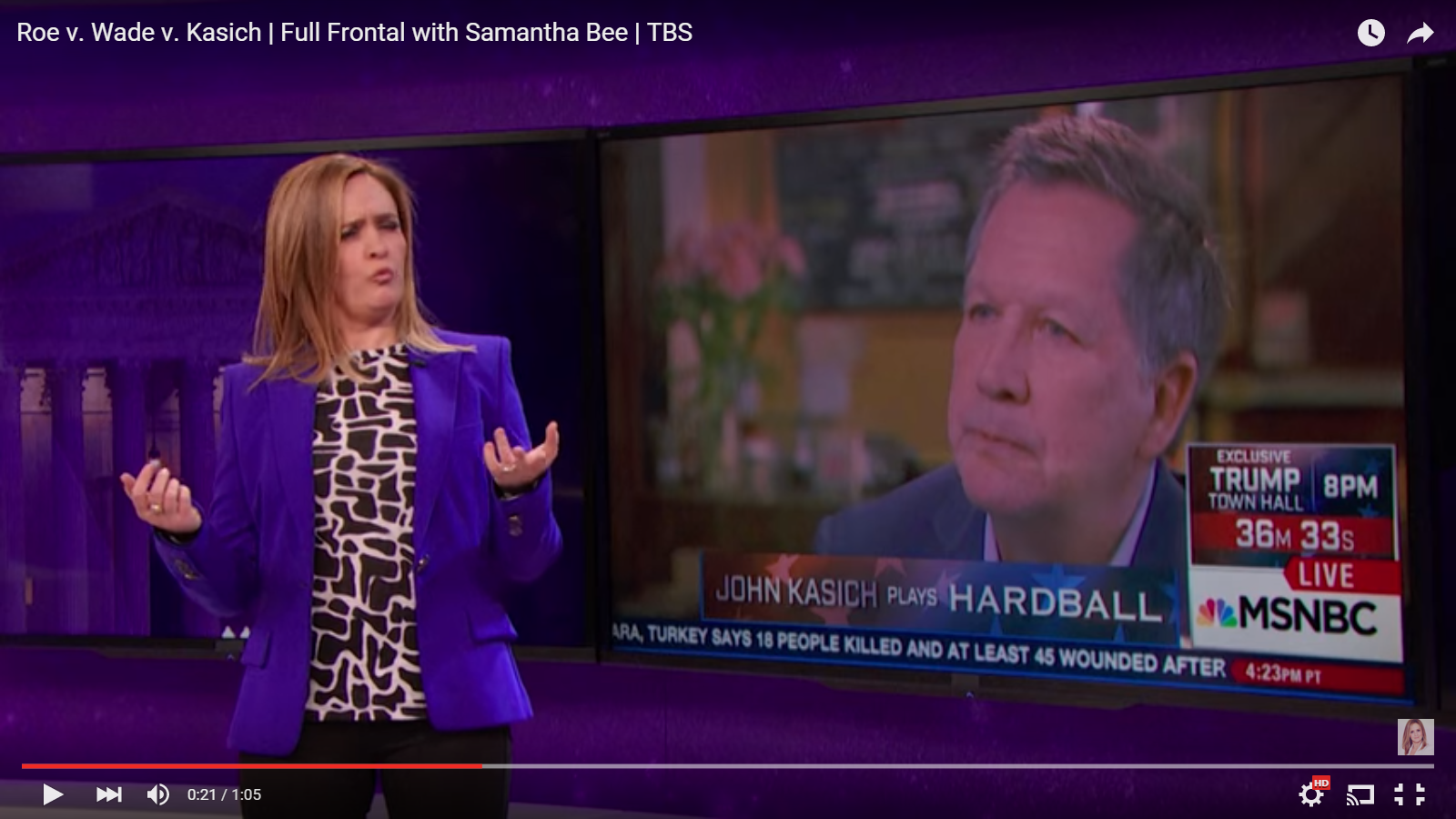 Demagogic pro-abortion ‘comedian’ Samantha Bee is at it again. On her TBS show Full Frontal, Bee took aim at current and proposed abortion laws in Ohio, particularly the vetoed attempt to protect preborn babies as soon as their heartbeats are detectable. As usual, all she proved is that it’s easy to make the misinformed laugh.

Six weeks? What the hell, Ohio? At six weeks, most women won’t even know they’re pregnant, especially now, since every time we wake up and realize Trump is president, we all have morning sickness. Women can miss a period from an extra-hard SoulCycle regimen […]

Look, you wanna know how extreme this bill is? [Plays news video about Ohio Republican Governor John Kasich expressing ambivalence] Even John Kasich thinks it sounds unconstitutional, and this is a man who puts his signature (and countless condiment stains) on every anti-abortion bill that lands on his desk.

[Editor’s Note: Kasich did indeed sign the 20-week ban on abortion, but he doesn’t sign every piece of pro-life legislation. His veto of the heartbeat bill was controversial among pro-lifers, but Kasich chose to side with Ohio Right to Life who reasoned that since a similar law had already been ruled unconstitutional in North Dakota and Arkansas, it could be a waste of taxpayer dollars to fight, only to be found on the losing end in federal court.]

Bee’s propaganda is particularly dependent on her audience not knowing anything about Kasich — like, for instance, his contention that Republicans “focus too much” on abortion, his refusal to say Roe v. Wade should be overturned, his support for rape and incest exceptions, and his opposition to using every tool at Congress’s disposal to defund Planned Parenthood. On the heartbeat bill, So contrary to Bee’s “even Kasich!” misdirect, he didn’t veto it because it was that extreme, but because he has a mixed record on abortion.

Bee continues, ranting about how “illegal” the heartbeat law would be, calling it “about as illegal as crack.” I don’t know what’s sadder: that Bee thinks “illegal because a court case so bankrupt its own scholars can’t defend it said so” is of equal weight to “illegal due to duly-enacted statutes”; that she thinks legislation everybody knew about all along was somehow “hidden”; or that she’s invoking child abuse in defense of an industry that has aided child abusers enormously.

Look, why are they so hung up on the heartbeat milestone? Maybe it’s because it’s the only thing that’s remotely person-like about a six-week-old embryo. And pro-lifers are geniuses at making a lentil-sized cluster of developing cells sound like a fully baked pageant baby.

Like many of her ilk, Bee styles herself something of a champion for “science” against “deniers.” Yet here we see her lazily dismissing the clear, objective, undeniable scientific consensus that embryos are people/babies, meaning that highlighting details like heartbeats is simply meant to call attention to a reality the likes of Bee strenuously avoid talking about. In fact, she emphasizes her claim that there’s nothing “remotely person-like about a six-week-old embryo” with the following graphic: 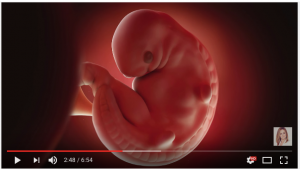 Defining humanity by outward appearance rather than by genetic composition and biological structure: not very scientific of you, Samantha…

I’m surprised they haven’t passed a law forcing women to put their sonogram through the Pet Me Snapchat filter before they decide whether to keep it. Which would be better than the form a woman will actually have to sign acknowledging that the quote, unborn human individual she’s carrying has a heartbeat. This puts doctors in the position of saying, I’m sorry, if you don’t terminate your wanted pregnancy, you could die. Also, sign this form saying you heard its precious heartbeat, you murderer.

Of course, we can’t count on Samantha Bee to give the full scientific info anyway. Here is a real video of a baby at six-and-a-half weeks, with her heart beating:

Abortion advocates refusing to really discuss the implications of wanting to destroy something that has a heartbeat is nothing new, but it’s disturbing to see it from someone who mentions the fetal heartbeat as much as Bee does in this segment. How would the pro-abortion movement ever get by without cognitive dissonance?

After trying to further distract her audience from thinking too deeply about the issue with some cracks about the Duggar family abuse scandal (as if counter-examples of even more prominent pro-aborts doing as bad or worse couldn’t be found to score cheap points against their side), Bee singled out GOP Senate Majority Leader Mitch McConnell as the “guy to thank” and the “man who always puts party before country” by blocking Barack Obama’s nomination of Merrick Garland to the Supreme Court.

“Yeah, why should someone who won the popular vote twice pick a justice?” Bee sneers. Oh, I don’t know…maybe because that same electorate took the Senate that confirms justices away from that president two years after that second popular vote?

Not that little details like that matter to the Cult of Abortion’s high priests and priestesses, because they’re not trying to win an argument; they’re trying to con audiences into thinking there is no argument.