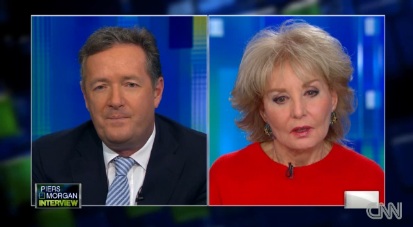 December is a month when people often take the opportunity to reflect on their year, and consider what they would like to do differently in the approaching new year. Lose weight, spend more time with family, or achieve a financial goal, for example. But this December, several celebrities publicly reflected on their whole lives, revealing that not having children ranks among the most regrettable life choices they made in otherwise very successful public careers.

Barbara Walters is known for her candor, and that hasn’t always been a good thing. She called Trig Palin “retarded,” for example, and didn’t hide her look of shock when Rachel Campos-Duffy stated that Obama did not deserve the Nobel Peace Prize due to his pro-abortion stance on The View several years ago. But in a recent interview with Piers Morgan, Walters freely confessed that her biggest regret in her otherwise-successful life was not having more children.

Walters said that she only had one daughter, and she had one sister (who is no longer alive), and feels that her family is just too small.

Similarly, the “Millionaire Matchmaker,” Patti Stanger, recently told OK! Magazine that her “biggest regret” was not having children.

My biggest regret is I didn’t have children. I had an abortion in my 20s. I was pregnant, and I didn’t have enough money and I didn’t think it was ok to have a child and be a single parent. And now look, everybody’s doing that.

Walters and Stanger both seem to “have it all,” but at the end of the day their choice to put career success ahead of family life has left them at least somewhat unfulfilled.

On the other hand, Oprah Winfrey recently stated that she does not regret her choice to forego motherhood. But her reason is not because she found more fulfillment in her career than she would have in raising children. Instead, she said that she believes that her children would have hated her for putting her career ahead of them:

If I had kids, my kids would hate me. They would have ended up on the equivalent of the Oprah show talking about me; because something [in my life] would have had to suffer and it would’ve probably been them.