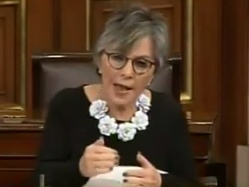 Barbara Boxer, Democrat senator from California, suggested on Tuesday that Roe v. Wade was the final word on the abortion debate. “Why would we want to go back to the last century and open up battles that have long been fought,” she asked.

[youtube http://www.youtube.com/watch?v=jC7F_vyVtzY&w=560&h=315] If the standard is that, once the Supreme Court makes a decision on something the issue should not be revisited, then it will be very interesting to see Boxer accept the court’s ruling on Hobby Lobby’s challenge of the HHS mandate if or when the court concludes that forcing employers to cover abortion-inducing drugs is unconstitutional. She said that that potential SCOTUS decision would be “very dangerous” because it could lead to a slippery slope about contraception coverage for all, but according to her view of SCOTUS decisions, we can expect her to accept the forthcoming decision without argument, even if the courts decide to “very dangerously” safeguard the religious freedom of conscientious employers.

Boxer has apparently not read the Roe v. Wade decision, because she claims that the rights of the “fetus” were considered and weighed against the rights of rights of a pregnant mother. The only attention that was given by the court’s majority opinion to the rights of a fetus was directed at demonstrating their belief that no such right existed, and therefore only the interests of the woman needed to be considered at all. To do this, they argue that the appellants in the case failed to demonstrate the personhood of fetuses which would entitle them to constitutional protection under the Fourteenth Amendment:

The appellee and certain amici argue that the fetus is a “person” within the language and meaning of the Fourteenth Amendment. In support of this, they outline at length and in detail the well-known facts of fetal development. If this suggestion of personhood is established, the appellant’s case, of course, collapses,  for the fetus’ right to life would then be guaranteed specifically by the Amendment. The appellant conceded as much on reargument. On the other hand, the appellee conceded on reargument that no case could be cited that holds that a fetus is a person within the meaning of the Fourteenth Amendment.

As Katherine Rosario of the Heritage Action acknowledges, “For Mrs. Boxer to declare the abortion debate over reveals a startling degree of hubris, as does her suggestion that the rights of children were considered in Roe.