Good Friday is the day during Holy Week when Christians commemorate the death of Jesus Christ, who died for the sins of the world, including the sin of abortion. While many will spend the solemn day treating it as such, Planned Parenthood, the nation’s abortion chain, has other plans. Planned Parenthood of the St. Louis Region and & Southwest Missouri chain is spending the holy day by reaping 10 percent of the profits from a $20 “crawfish boil.” The event, advertised on Facebook, even includes the name “Good Friday.” 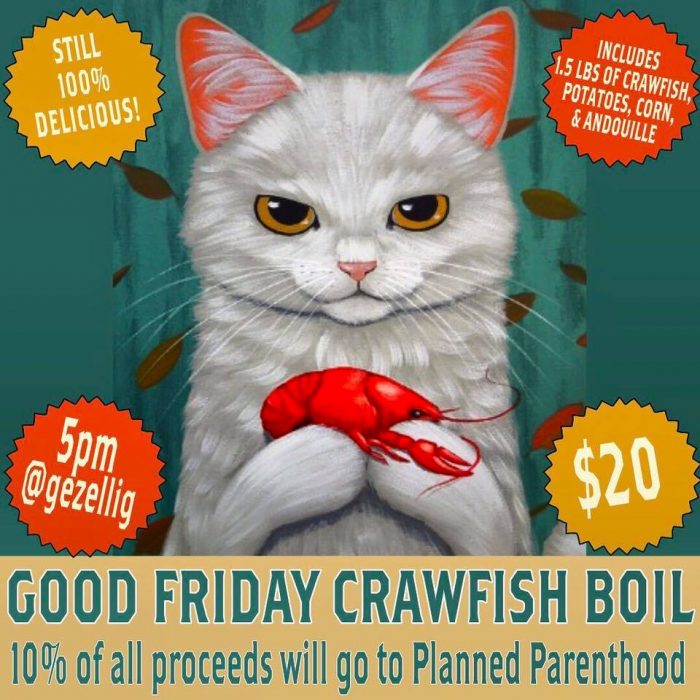 The event will take place at Gezellig in St. Louis. The bar advertises the event on its Facebook page, but neither the page nor website indicate any other support for Planned Parenthood. A description reads in part:

All descriptions involve a positive atmosphere, flow, or vibe that colors the individual personal experience in a favorable way and in one way or another corresponds to social contexts.

What we will achieve through our knowledgable and approachable staff, design, decor, and overall atmosphere is a sense of this very abstract notion, all while providing the ultimate craft beer experience. Whether stopping in to grab something quickly to take home and enjoy with dinner, whiling away the afternoon or evening at the bar or one of the tables, or coming in for special events and releases, the end experience at Gezellig will be one of contentedness. We will provide a seamless cohesion to the entire experience for all patrons.

It is not clear how this welcoming message applies to those who do not wish to see Planned Parenthood benefited, especially on such a holy day.

This kind of offense is not new. A Planned Parenthood events website advertises a “Fish & Chips Friday” event during all Lenten Fridays, a time when many Christians choose not eat meat. Ten percent of the proceeds from these events, which amount to several weeks worth, in addition to Good Friday’s event, are benefiting Planned Parenthood. Using Lenten to benefit Planned Parenthood could certainly be construed as sacrilegious.

If the location receiving these funds sounds familiar, it is likely because Planned Parenthood of St. Louis has been called “the most dangerous abortion facility in the U.S.” The facility, which is the last remaining one in Missouri, has sent 65 patients to the hospital so far since 2009 — an astounding average of one patient hospitalized every six weeks. The facility sent two patients to the hospital in March 2017. One day after the second incident, a Twitter account connected to the facility tweeted a lighthearted picture advertising the facility’s other services.

Add to the fundraising events another post (asking for donations, naturally) which reads “THANK YOU for your support during 40 Days for Life [an annual pro-life prayer vigil],” and you get the idea that Planned Parenthood could be deliberately seeking out ways to offend religious pro-lifers.