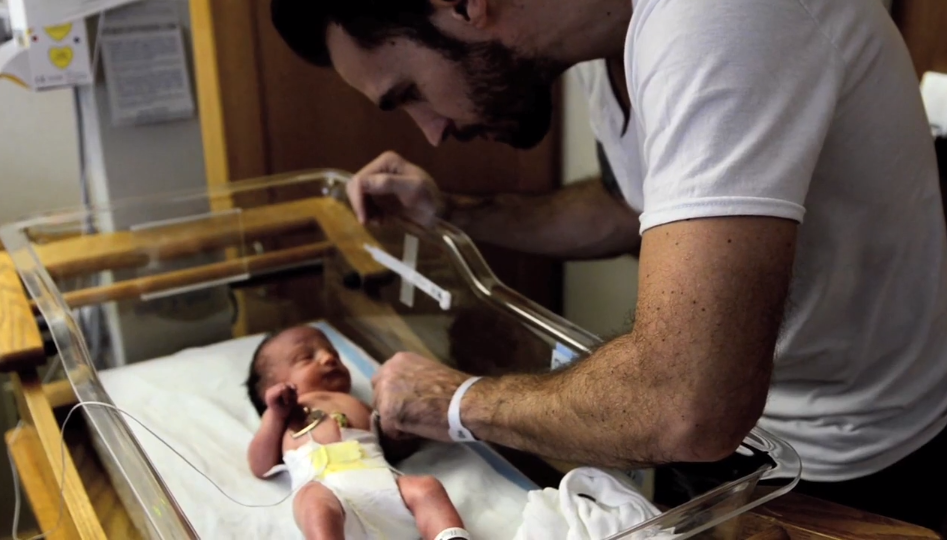 Zion Isaiah Blick was born on January 11 with Trisomy 18.  He lived only 10 days after birth, but within just a few short weeks, the story of his life had touched the world.  His father Josh Blick said of his son in a video posted on Vimeo, “I want you to know that you didn’t have to be big and tall or even loud for us to notice you. You didn’t have to stand in front of a pulpit or write a book to capture our attention. You just did.”

A youth pastor at Alpine Chapel, a non-denominational church in Lake Zurich, Illinois, Josh and his wife Robbyn posted touching Instagram pictures and a Video to commemorate Zion’s short time with them and their four other sons, writes the Daily Mail.   In the video, Robbyn reflected, “My sweet, precious Zion, you are my gift.  Every breath you took was a moment to inhale the perfection of God’s beauty.  Every beat of your heart was a measure of love.”

DAY 8 | He just wouldn’t let go. So I stayed there for several hours. #iheartzion #livingwithamiracle

Late nights with Zion. Now we have late nights talking about how greatly he’s impacted lives of those around him. #iheartzion #worldchanger A photo posted by joshblick (@joshblick) on Jan 30, 2014 at 9:37pm PST

Miss this little guy. You were created with a purpose. I love seeing you bring joy and hope to people everywhere. Great job! #iheartzion

He was a great listener. I miss this little guy. A lot. #iheartzion

Robbyn, 32, first discovered at around 20 weeks into her pregnancy that Zion had Trisomy 18, or Edward’s Syndrome, a chromosomal condition that causes abnormalities in various parts of the body.  She and her husband had no doubt they would choose life for their son.

Devout Christians who believe in God’s plans for their lives, Robbyn said in an interview with The Blaze, “Our choice is always life and giving him a chance.”

When they discovered he had a heart defect, doctors did not predict Zion would live through the pregnancy or delivery.  They said his condition was “not compatible with life,” The Blaze reports.  When he survived both, they said he would only live for a few minutes or hours.  But he was a fighter and proved them all wrong.

After celebrating his safe delivery, the Blicks were able to bring their precious son home with them when he was only 4 pounds, 7 ounces.  They were blessed with many friends and family willing to help them out.  Robbyn said this “allowed us to inhale him. I literally didn’t put him down until he was one week old. He was held and loved and cherished for every minute of 10 days.”

As the days went by, Zion’s breathing became increasingly strained.  By day nine, he was losing interest in eating.  Josh had to grab him once and rub his back when he suddenly began gasping for breath, his color turning to blue.  Robbyn said, “He hadn’t done that before. … I knew in my heart things were getting closer to ending.”

The next day, January 21, Zion was worse.  The family watched helplessly as his breathing became more labored.  Then he died, “peaceful and perfect.”  The family held his tiny, lifeless body for hours, savoring their last moments with him.

Through their sorrow, the family is comforted knowing Zion is in heaven now, safely in the arms of Jesus.  They cling to all they learned through knowing him.  Josh said, “You did more in your 10 days on earth than I could ever hope to.  This is the hardest thing that I have ever had to do.  But I want you to know that I am so proud of you.”

The Susan B. Anthony List points out in their article “Zion’s Challenge” that the decision the Blicks made to keep their son is not the norm in our abortion culture. “These courageous families teach us that even in the face of unimaginable challenges, every life deserves to be lived, and every person has the capacity to change the world,” they write.