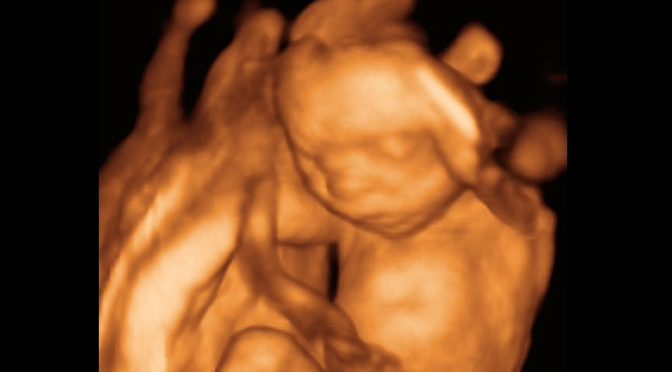 Sometimes, kids do unusual things. Any parent will tell you that. It’s a little scary sometimes, but more often than not it’s enjoyable watching kids just be kids. Each one is unique, and their individuality can be observed in their behavior from the beginning.

It seems that my five-year-old son, who likes to jokingly punch himself in the face “just for fun,” is not the only one. A Kansas couple, Dave and Vanessa Watson, recently observed their preborn son, EJ (Edward James), engaging in a one-man boxing contest, which he won handily. At a 20-week ultrasound, EJ was seen striking himself in the face with the speed of a skilled fighter…

“It was a real shock,” said Dave. “We were watching the ultrasound live and suddenly this happened. The nurse laughed and said that was a new one for her.”

Although boxing may be uncommon among preborn babies, at 20 weeks babies often twist, turn, and otherwise perform vigorous acrobatics. They sleep, hear sounds, have sweat glands and fully developed eyes, and according to many scientists, can feel pain. (There is also “a steadily increasing body of medical evidence and literature supporting the conclusion that a fetus may feel pain from around 11 to 13 weeks, or even as early as 5.5 weeks.”) The Daily Mail reports that Vanessa is due to give birth this spring. In the meantime, let’s hope EJ takes it easy on himself.