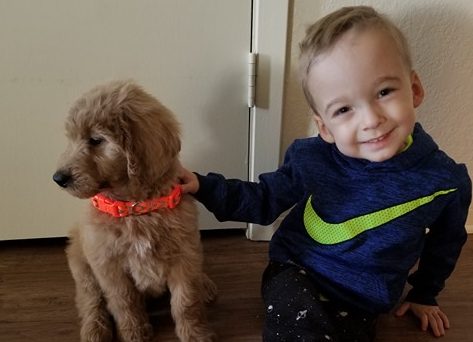 Two years ago, Live Action News brought you the story of Oliver Hinkley, a little boy with spina bifida who, according to his mother, “has broken every boundary set on him.” Brittney Hinkley found out that there were abnormalities with her baby at 20 weeks and were sent to get a higher level ultrasound. “The moment he reached for the tissues, I knew it was confirmed,” she said. “Spina bifida, myelomeningocele… the worst type.” This kind of spina bifida means that the spinal cord actually protrudes through an opening, and most children with spina bifida also have fluid on their brains. Brittney was offered an abortion, but she refused. Oliver’s parents chose life.

“The only time it was brought up was when my first OB asked if I had wanted to get one,” she explained. “Needless to say, we left him without a second thought. I had a lot of support from Aaron, and we both wanted Oliver, regardless of his new diagnosis.” The typical abortion that would be done on babies Oliver’s age at the time — 20 weeks — is the brutal D&E abortion, in which a living child is dismembered piece by piece and removed from the womb:

Oliver has undergone several surgeries, and when Live Action News last spoke to the Hinkley family, Oliver was talking, learning sign language, and crawling — even though doctors said he would likely never even sit up on his own. Today, Oliver is a big brother to little Theodore… and he’s walking.

Brittney posted the incredible video on Facebook, explaining that he had to cut back on his therapy time due to the cost of their insurance. So she went to Home Depot to find the tools to help him with therapy at home. “I not only received help finding the items needed, but suggestions to fit my son better, and they also put it together for me and gave it to us free of charge,” she wrote. “This little item, made of pvc pipes and glue, is everything to me and my son. It gives him the gift of being able to walk.”

Physically, Oliver is truly surpassing all expectations. “He has taught himself how to get on and off the couch, even our king size bed!” Brittney said in a follow-up interview with Live Action News. “With the proper equipment, he can stand and take steps with assistance. Not much has changed physically (he still can get by in 12 month pants), but he has learned so much intellectually.”

Oliver was evaluated in October to measure his intellect, and came in above his age level. “We were always told to expect delays, physically and intellectually, due to damage the brain suffered from hydrocephalus and possibly from his shunt surgery at a month old. It kind of came hand in hand, as what to expect with the diagnosis of spina bifida,” she explained. “He is at even a little higher than where he should be for his age group.”

And he’s also loving being a new big brother. “Oliver is so amazing with Theodore,” Brittney gushed. “He shares, gives random kisses, let’s me know when he’s doing something he shouldn’t, all while still being that older brother who takes his toys now and then.” The family is also training their new puppy to be a therapy dog for Oliver, who will be four in April.

Oliver’s story shows that people with disabilities can and do lead fulfilling, happy lives. Many people react to the news that their child will have a disability with fear, and understandably so. But doctors must stop placing boundaries on these children and making it sound like they aren’t capable of truly living. These children deserve better.