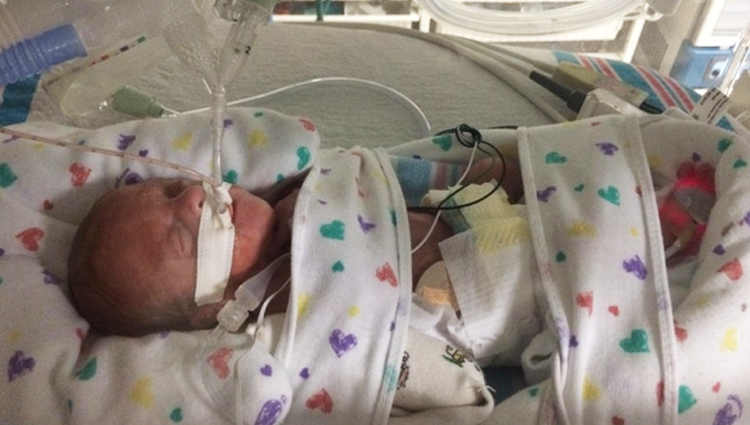 Baby Haiden is a fighter.  He survived after being born four months early on a cruise ship in the middle of the Caribbean.

Haiden’s mother, Emily Morgan, told the Associated Press her son was due in December, but contractions began on August 31st, during a Caribbean cruise.

The pregnancy was progressing as normal, until contractions began.

“I had felt him kicking,” Morgan said. “I felt the process of him getting bigger.”

Morgan was shocked when contractions started during the halfway point of her pregnancy. At first, she thought it was a false alarm, but she called for medical staff. Morgan was told by a doctor aboard the cruise ship that they were still 14 hours from the nearest port in Puerto Rico, and she could not give birth yet— but baby Haiden was coming.

After delivery, doctors initially told Morgan she had miscarried, but 45 minutes later, medical staff told her baby Haiden had survived, but he wouldn’t live long .

They brought Morgan to see her newborn son, who was crying through a tiny oxygen mask on his face.

As time passed— with baby Haiden fighting for his fragile life— medical staff created a makeshift incubator, and wrapped him in dry towels and microwaved saline packets.

Upon arrival in Puerto Rico, the family was rushed to a hospital, and a few days later, they transferred to a children’s hospital in Miami.

Now, Haiden is making great progress. Morgan says the plan is for Haiden to remain under hospital care until his due date, December 19.

A baby like Haiden, born four months premature – and so far from a hospital – has less than a 10 percent chance of surviving, according to Dr. Bradley Yoder, medical director of the newborn intensive care unit at the University of Utah.

“On a daily basis, they tell us he’s a miracle baby and that he wants to be here,” Morgan said.

Due to extensive medical bills, the Morgan family has created a fundraiser on GoFundMe. On the fundraiser page, Morgan writes:

To see all the little [characteristics] that he has gained in the short time already has been amazing. Haiden is a fighter and he will make it through all of this. He might not like needles or want to go to any checkups for a very long time after this, but he will continue to be an inspiration to all that hear his story. Thank you all for the kind thoughts we receive, its nice to know so many people are praying for our family.