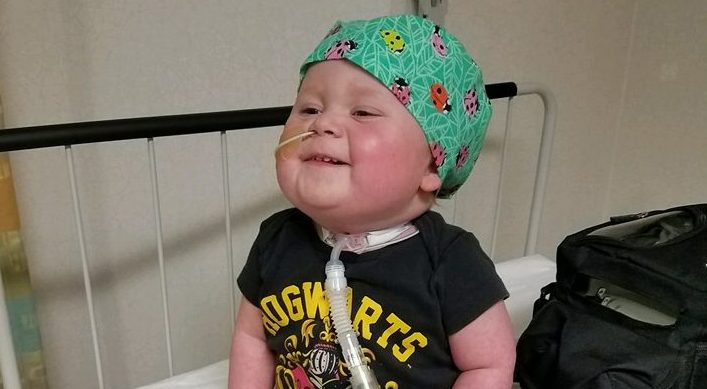 20 weeks pregnant with her first child, Caitlin Veitz and her husband Brian were excited to learn they were having a girl. But happiness was quickly followed by devastation. Their daughter was diagnosed that same day with ectopia cordis, a rare condition in which the heart has grown outside of the body. In the case of their child, the baby’s ventricles were outside of her chest, but her atrium was on the inside.

“Basically what happens is very early on, the membrane that attaches the heart to the chest wall fails so that the heart is kind of allowed to go wherever,” Veitz told the Billings Gazette during her pregnancy. “And in her case, it ended up just below the sternum. It’s actually in a good place because it’s easier to move it back into the right position from where it is right now.”

Her parents were scared that their baby was going to die, but they also knew that they had to help their daughter.

“You can’t let it just cripple you,” explained Brian Veitz. “You let it cripple you, then you’re not living any more.”

The couple’s doctors referred them to Dr. Joseph Dearani at Mayo Clinic in Rochester, Minnesota, who advised the couple not to give up.

“We wanted to give this kid a shot, and we had a chance of giving the family and the child a realistic hope,” he told Today.

3-D imaging helped doctors get a clear picture of the heart while she was still in the womb. They believed that if the baby, named Kieran, was able to survive the pregnancy and birth, she would have a shot at surgery. A cesarean section was scheduled and if the baby was able to be stabilized after birth, a team of 60 doctors would operate to place her heart inside her chest.

The date of the C-section was moved up a week after doctors became concerned about Kieran. Thankfully, she was stable at birth and doctors were able to operate.

The successful surgery lasted just five hours and Kieran was brought to the cardiac intensive care unit where she would be closely monitored. Doctors were concerned she might not survive that first night, but after three months, she was able to go home with her parents.

“We started out saying we would be here for her as long [as] she felt like fighting. Then she made it to birth, one day, two days, three days, a week, a month, six months, a year, and now 20 months old, about to turn two,” Veitz told Life Daily.

“She’s essentially re-writing what most know about the condition,” she continued. “She’s going to grow up. She’s going to do everything anyone else gets to do.”

With more surgeries in her future, as Kieran continues to defy the odds, she is helping doctors to better understand how to help anyone born with the same, or similar condition. Her life is worth living, and though still a child, she has already helped to advance medical technology and save future lives.