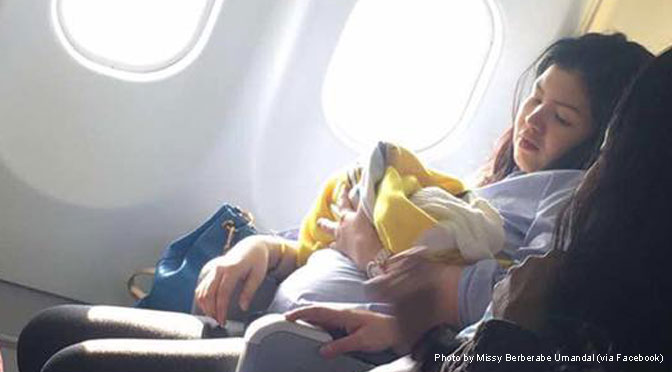 A photo of a mother holding her newly born baby girl aboard a jet airliner has gone viral. The baby was reportedly born on a Cebu Pacific Airlines flight from Dubai to the Philippines, at an altitude of approximately 36,000 feet.

Missy Berberabe Umandal, the passenger who took the snapshot, described the event: “It was such [a] heartening moment. Mothers don’t get as much credit as they do, and that mother who gave birth on a plane was truly a wonder[ful] woman.” Umandal was flying home to the Philippines, when the mother went into labor near her. Umandal shared her story in a post on Facebook:

A member of the flight’s lead cabin crew told ABC News the successful delivery of a new baby girl was “certainly the most special” moment in “11 years of flying.” “… We are blessed to have been an instrument in your safe delivery,” he told the mother in a message. “You will always be my most memorable passenger.”

Umandal says she is surprised at the viral interest in the photo she took, claiming it was intended to remain private among friends. “Witnessing that event has changed me in more ways than one,” she said. “I wanted to be able to touch the lives of others by narrating a story of how a miracle came to be.”

Cebu Pacific told reporters that the mother of the baby girl is declining press interviews at this time. The airline has reportedly awarded the mother and her family one million “GetGo” points, to be used for free flights.