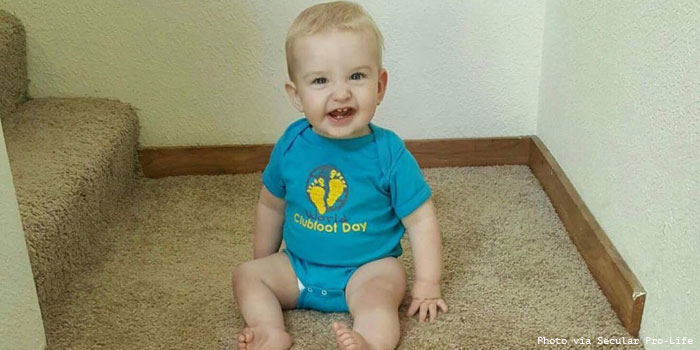 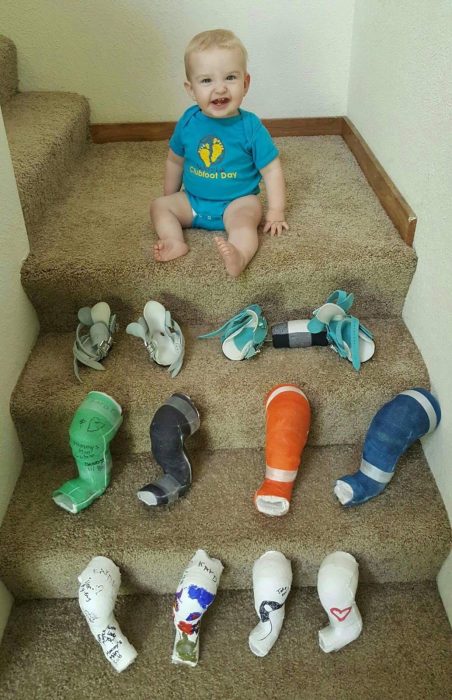 Silas and his casts

(Secular Pro-Life) After three years of secondary infertility, Heather Iverson and her husband finally got to see two little lines. They were absolutely overjoyed, and so was their daughter, who was getting promoted to big sister. The Iversons went with a home birth and decided to leave the sex of their precious new addition a mystery until the birth. This is Heather’s story.

“It’s a boy! Silas Lee!” I didn’t even notice he had clubfoot when he was born. We just snuggled, riding out the most amazing natural high of a med-free home birth and seeing our son for the first time.

After about an hour, the midwife brought him over to weigh and measure him and get his little footprints. That is when she told us that our son had clubfoot. Many would have been distressed but we were just happy our precious son was here and knew that we would get through this. We educated ourselves on what clubfoot was and visited specialists to start the correction process. Our paediatrician referred us to an orthopaedic specialist and at 6 weeks the process began. Due to growth, correction of clubfoot requires a series of casts. Each week you go in, they take one off and put another one on; each time stretching the foot a little more until it is in the correct position.

Eighty percent of babies with clubfoot need a minor procedure called a tenotomy. A tenotomy is a minor procedure where they snip the Achilles before they apply the last cast; that cast then stays on for three weeks while the Achilles reattaches with the proper stretch to it. Our son fell into the other twenty percent, which was great news. It only took four casts to get his foot where it needed to be. The next step is the boots and bar. It is something that attaches to both feet and holds the clubfoot at the corrected angle to prevent it from relapsing. He had to wear that for twenty-three hours a day, seven days a week for three months. After that he went down to wearing it just at night and he will have to continue to do so until the age of five.

It breaks our heart every time we have to put those boots and bars on, but we will take that heartbreak over the kind that abortion leaves. Shockingly, every year, dozens of preborn babies who are diagnosed with fully treatable and correctable conditions like clubfoot and cleft lip are aborted.

When our boy was six months old we noticed that his toes were tucked on his clubfoot, so we went back to our doctor who attempted to correct it with two more casts. She was happy with the progress, but we were not. We decided to go to Dr. Dobbs, one of the leading orthopaedic doctors in the U.S. We made weekly trips from Michigan to St. Louis, Missouri, for more casting and an MRI.

Thankfully, Dr. Dobbs was able to help Silas’ toes gain flexibility, but they will always be a little tucked. So after eight casts and the boots and bar, we have a 14-month-old boy who is fully capable. In spite of the casts, Silas has reached every milestone right along with his peers. His foot hasn’t slowed him down at all; he makes sure to remind us of that every day!Babi

Has it been easy? No, it’s not an easy journey having an infant in casts or foot braces, but it’s worth every doctor visit and brace application. All it requires is your time, love, and dedication. Isn’t that what being a parent is all about?

When your child receives a diagnosis—whether it’s prenatally or postnatally—knowledge is empowering and will equip you to be the best advocate you can be for your child. Instead of listening to doctors or loved ones telling you to abort, listen to the heartbeat of your growing baby who deserves a chance at life.

Editor’s Note: This article was originally published at Secular Pro-Life and is reprinted here with the author’s permission.