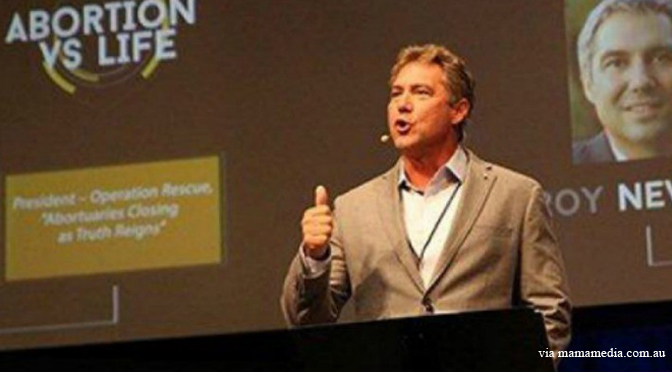 As previously reported by Live Action News, Center for Medical Progress board member and Operation Rescue president Troy Newman was detained this week in Australia after the Australian government revoked his visa, based on the claim that he promotes violence against abortion providers.

Newman was already en route when he was informed of the revocation, traveling overseas to speak at a convention for Australia Right to Life. He was halted while still in the U.S., during a change of flights in Denver, Colorado, and was told he could not continue his flight to Los Angeles. Despite this, he was able to catch a different flight into the country in the hopes that any misunderstanding might be resolved on the way.

Despite his appeal to remain in the country, today comes the news that an Australian High Court justice has ordered Newman’s deportation by as early as 6 pm today.

Australian High Court Justice Geoffrey Nettle claimed that Newman “does not come to this court with clean hands” and that “he is the author of his own misfortune and predicament.” Australian immigration minister Peter Dutton added, “His detention and removal is entirely related to his decision to openly flout Australian law and travel to Australia without a valid visa.”

LifeNews also reports that Newman has been ordered to pay court costs for the Australian government:

Mary Collier of Australia Right to Life, which had invited Newman to Australia for a speaking tour, told reporters that “the judge found that the balance of convenience did not favor the grant of interlocutory injunction to prevent his removal from Australia while that serious question is tried. On this basis, the application for an interlocutory injunction was refused. Any final determination of the matter will occur at some later date.”

“It is a sad day when downright lies and twisted words triumphs over truth, but that is exactly what happened today,” said [Operation Rescue’s Cheryl] Sullenger.

Sullenger earlier in the day lodged a formal complaint with Minister Peter Dutton objecting to the poor treatment given Newman, which included holding him in solitary confinement, denying him access to his attorney, and banning any communication with his wife until just minutes before his final hearing.

Troy and his wife Mellissa are set to return home to the U.S. on the first flight in the morning, Melbourne time. Meanwhile, Troy remains incarcerated until his flight.

LifeNews also reports that Newman’s wife was helped by Australia Right to Life after officials left her alone and with no luggage, and that “Operation Rescue is lodging a formal complaint with the Australian Minister of Immigration Peter Dutton over Newman’s poor treatment.” Newman was held on a military base, reportedly “with criminals,” and has been disallowed from communicating with his wife during his detention.