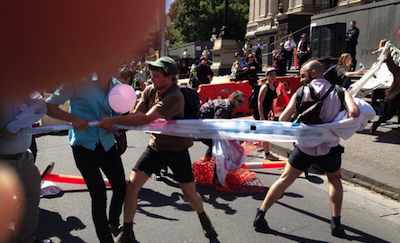 Socialists and feminists who advocate abortion abandoned the search for equal treatment and fairness that their ideologies enshrine when, earlier this week, they overtook pro-lifers at a rally in Melbourne with violence and verbal attacks. According to Melbourne’s Herald Sun, socialists and feminists stormed Parliament House, where three thousand pro-lifers were gathered to celebrate life and speak out against abortion.

According to witness Andrew Bolt, who authored the Herald Sun article:

I saw those Socialist Alliance protesters and feminists for hours shout down, blockade, hit, abuse and destroy the property of citizens, priests included, trying to peacefully express a different point of view – that killing babies in the womb is wrong.

I saw socialists and feminists yanking signs from the hands of women older than themselves and destroying their balloons, as if those women had no right to speak and no right to their own property.

I saw some socialists and feminists push police and shove and hit anti-abortionists. One politician was hit with an egg; another was allegedly kicked.

“…the police knew who was causing the trouble,” the witness continued, stating that police placed themselves in between the pro-lifers and the outraged feminists and socialists, to protect the pro-life advocates who were being attacked. The witness was baffled at their behavior, since socialists and feminists share the common aim of equality. Apparently, equality for these socialists and feminists did not apply to those who disagree with them on the issue of abortion. He questioned how these groups can consider themselves progressive when their extreme views and hatred cause them to betray their own ideologies in emotional outrage.

The incident in Melbourne this weekend was eerily similar to the mob demonstration at the Texas capitol during special sessions this past summer, where legislation of the pro-life omnibus bill – which ultimately passed – was being discussed. The disrespect for the judicial process, and for pro-life advocates, progressed to such a dire point that law enforcement officials ultimately had to remove the so-called feminists from the building.