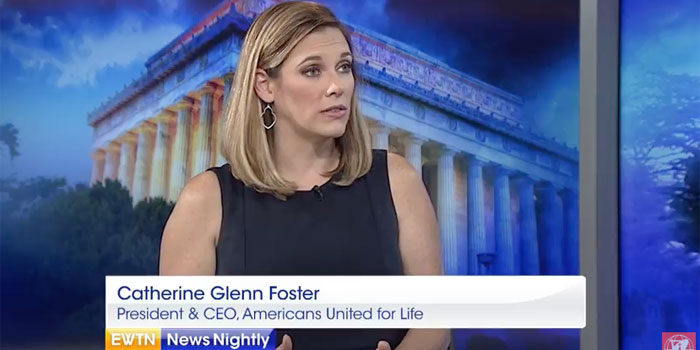 While President Donald Trump has stated that he is committed to defunding Planned Parenthood, and the U.S. House of Representatives passed such legislation, the U.S. Senate has failed to do so. Despite this, there are pro-life activists who believe success at the state level can influence the federal level. But the failure to pass such legislation federally, even with Republicans in power, has many asking the question, “Are Conservatives Serious about Defunding Planned Parenthood?” This was the topic for a pro-life panel on February 22 at the Conservative Political Action Conference (CPAC). The panel included Catherine Glenn Foster, President and CEO of Americans United for Life. Foster also spoke with Live Action News about the topic.

Foster emphasized that for comprehensive care, women have better places to turn to than abortion facilities like Planned Parenthood. “That is one of the many reasons why I am so very committed and devoted to ensuring that women get comprehensive, holistic healthcare options, and that’s something Planned Parenthood doesn’t provide,” she said, sharing that she had an abortion as a teenager.

We want women to have a provider who they can know, and go to, and trust, and hopefully go to for years…. That’s what we want. We want women to be building their relationship with their doctor, and that’s what the Supreme Court wanted with Roe. That’s what they said, it’s an issue between a woman and her doctor, assuming that the woman and her doctor will jointly make this decision that will be best for the woman — but that’s not the situation.

Planned Parenthood isn’t in the business of building doctor-patient trust. “The woman walks in” for an abortion and “meets the abortionists two seconds before,” Foster says. An abortion is not as simple as something between her woman and her doctor, Foster adds, explaining how she did not go to her doctor to discuss abortion — “not even remotely.” At the time of her abortion, she says, “I was looking to be talked out of it and [the abortion facility staff] talked me into it.”

But many people are unaware of how Planned Parenthood works, and in their zeal to support resources for women, they support Planned Parenthood. Foster says these people often “just don’t know the facts on the ground,” adding that pro-lifers must “meet people where they are” using “more stories,” emphasizing that “it’s not just about defund[ing]” Planned Parenthood, it’s “defund and redirect” those funds to community health centers. Foster says this “has been AUL’s vision and goal from day one.”

Audits of Planned Parenthood at the state and federal level have shown fraud and waste to the tune of millions of dollars. These audits offer a limited glimpse at a small number, and likely show only a fraction of what goes on. What the audits do show, however, ought to be enough — something all Americans should come together on, as “common sense.” Planned Parenthood commits abortions while improperly using taxpayer funding, leading to government waste and enabling the abortion corporation to make tens of millions in profit annually.

For reasons like these, there can be, and has been, success at the state level regarding defunding Planned Parenthood. Foster says:

We definitely see that the states are the battleground to be looking to. That is pivotal because you don’t have the same roadblocks and so we’re seeing so much more progress. While we haven’t been able to really defund Planned Parenthood on the federal level, so far, really the best we’ve seen this year is the Title X and the Medicaid where you’re looking to the states, to the agencies, to choose to do that. But then on the state level we already have 24 states who in some way, at least some funding, they have defunded…. Even when they’re enjoined, [laws] still have protective effects… but on the state level, we see states making progress.

This applies to states defunding Planned Parenthood, as well as those with parental involvement laws and 20-week abortion bans. At times, however, these state laws are challenged and may eventually reach the U.S. Supreme Court. AUL believes the Court is likely to hear cases dealing with the abortion issue, which could serve as “that test case” to overturn Roe, sending abortion laws back to the states.

Foster, and the CPAC panel overall, concluded with a sense of optimism. The successes at the state level to defund Planned Parenthood are worth acknowledging. They reflect a pro-life tide, and provide a vision of how to lead to successes at the federal level.

The panel can be seen on CPAC’s video stream, starting at about 1 hour and 6 minutes.