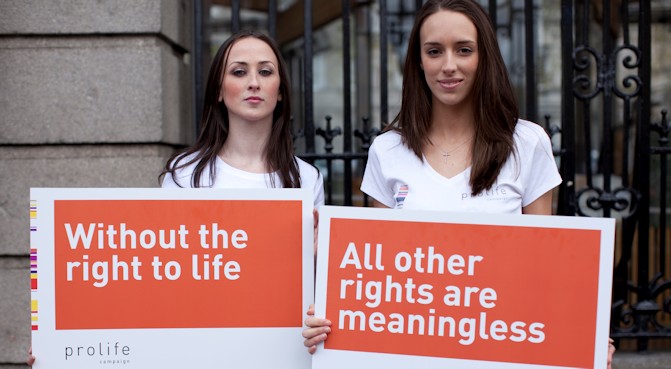 In late February, people from 40 Days for Life were told by an Arkansas government employee that they were violating the law by holding signs on a public sidewalk near a highway.

Thomas More Law Society – who represented some of the 40 Days for Life volunteers – wrote to the Arkansas State Highway and Transportation Department.

[V}olunteers of 40 Days for Life Fayetteville were advised by an employee of the Arkansas State Highway and Transportation Department…that she believed the volunteer’s signs were in violation of State Law and that they would face criminal fines if the continued to display their signs. …

Ms. Sinclair explained to the volunteers that they were standing along a state highway and, as a result, they were forbidden from placing signs in the ground while they stood beside them or from even holding their signs. She informed them that any and all signs must be “approved” by the State before they could hold them on the public property alongside the highway. …

Ms. Sinclair returned…informing the volunteers that even holding the signs was a violation of Arkansas law… Ms. Sinclair told the volunteers that each person who continued to hold a sign would be fined between $25 and $100, for violating S. 5-67-101. Our clients – facing hundreds or even thousands of dollars in fines over the next several weeks – have been forced to put away their signs, their First Amendment right to free speech completely suppressed, until this matter is resolved.

It is unlawful for any person, firm, or corporation to place any advertising sign on the highway right-of-way in this state, except for a sign placed under direction of the State Highway Commission. The majority of pro-life signs could never legally be considered “advertising signs,” as they represent a viewpoint, rather than trying to attract business. Thomas More sent a couple photos of signs held by 40 Days for Life volunteers to the Arkansas Department. The signs said, “Pray to end abortion,” “Women do regret abortion,” and “‘Before I formed you in the womb, I knew you’ – God.”

Four days after Thomas More’s letter was sent – and only two business days later – the Arkansas Department responded. Chief Legal Counsel Rita S. Looney wrote that she did not believe holding pro-life signs near the highway was against the law:

It is my informed opinion that none of the referenced statutes seek to prohibit First Amendment expression, such as volunteers holding signs which only convey a particular view “on a matter of public importance.”

Ms. Looney believed that the only actual way to violate the law was to place an advertising sign in the ground or to attach it to something near the highway such as a utility pole or plant. (Incidentally, she still asked the 40 Days for Life volunteers to refrain from even holding advertising signs – something that does not appear to be against Arkansas law.)

Thankfully, the Arkansas Department’s response was swift, and appropriately recognized the First Amendment rights of the 40 Days for Life volunteers to hold their pro-life signs.

“The Department’s letter officially confirms what we already knew to be true: the First Amendment applies even next to a State Highway,” said Corrina Konczal, Thomas More Society Associate Counsel.  “This amicable resolution ensures that the 40 Days for Life participants are able to hold signs informing passing drivers of their public stand for life without the fear of unjust criminal punishment.”

The peaceful 40 Days for Life campaign is still going on – through March 29 – all around the country. To get involved (or find out more), go here. Since the start of the Spring 2015 campaign, 119 lives have already been saved!