And the pro-choicers lose.

Editor’s Note: We recognize that not all of our readers come from a faith background. However, many people involved in the abortion debate discuss the relevance of the Bible. We believe that this article will provide an additional perspective. 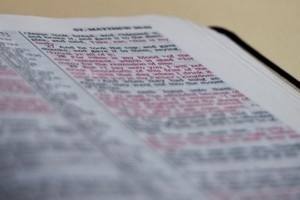 Does the Bible really teach people that abortion is a correct choice?

There are two groups of people who commonly like to claim that the Bible is pro-choice. First, there are those who are virulently opposed to religion (or at least Christianity) and desire to prove that Christians are hypocrites. Second, there are those who classify themselves as religious or Christian but support abortion and desire to believe that the Bible backs them up. So is the Bible pro-choice? How do the arguments of these two groups fare?

Argument #1: Stewardship and Free Will

The Bible clearly lays out the principles of stewardship and free will. In the Garden of Eden, man was instructed that he had responsibility for every living thing on Earth (Genesis 1:27-28). The entirety of the Bible also makes it very apparent that God has given mankind the ability to make up their own minds and choose their own paths (commonly referred to as free will). One pro-choice article, claiming to lay out the Bible’s pro-choice standards, contends:

It follows that, as moral agents, women have the God-given obligation to make decisions about the course of action that seems most responsible in cases of unwelcome pregnancy.

Created in God’s image, we are endowed with the ability to make moral choices. This ability is the very basis of an individual’s dignity and autonomy.

It’s pretty sad to claim that the Bible implies that being a “good steward” of other living human beings includes killing them. That is groundless. There are no examples in the Bible, related to caring for people, that include killing them. Bad argument all around here.

Argument #2: Sanctity of Life and Responsibility for Procreation

The Bible places full responsibility for procreation in the hands of parents. Requiring a woman to complete a pregnancy against her will devalues motherhood and shows lack of respect for women.

Uh, what? It’s rather telling that this author is claiming a Biblical basis on these issues without mentioning a single actual Bible verse. The first paragraph just doesn’t make sense. Please don’t try to argue that you believe in “the sanctity of all human life” and then use four sentences to end up admitting that you support killing the most innocent and helpless life based simply on the choice of the mother. The author couldn’t use a Bible verse for that because there isn’t one.

Instead, the Bible talks over and over about the preciousness and uniqueness of life in the womb as formed by God Himself. See, for example, Psalm 139, Job 31:15, Isaiah 44:2, Luke 1:36, and the story of the prophet Jeremiah. And yes, the Bible teaches that God equally values the lives of men, women, and born children. In an age where women were looked down on and cast aside, Jesus was one of the first to ever teach on their equality.

It’s also patently false to claim that the Bible “places full responsibility for procreation in the hands of parents.” Check out the multitude of verses that discuss how God has the ability to open and close the wombs of women and how children are His gift – Genesis 29:31, Psalm 127:3-5, I Samuel 1, and the story of Elizabeth, John the Baptist’s mother.

Argument #3: The Big One – the “Exodus” Argument

There are many abortion supporters who really like to “get” pro-lifers with this one. Take Jezebel writer Erin Gloria Ryan’s words. (As a side note, her article claims that “conservative Christians conveniently ignore all the pro-choice passages in the Bible,” and yet the only passage she personally discusses is the one in Exodus. So much for “all” those passages.)

In fact, in Exodus, God talks about how if an assailant harms a pregnant woman and her pregnancy is ended as a result, the assailant only owes the woman’s husband a fine. But if he hurts the woman beyond the miscarriage? Ruh-roh. …

Of course, the Exodus passage referred to so often is Exodus 21:22-24. Here it is in the King James Version, one of the original English translations of the Bible:

If men strive, and hurt a woman with child, so that her fruit depart from her, and yet no mischief follow: he shall be surely punished, according as the woman’s husband will lay upon him; and he shall pay as the judges determine. And if any mischief follow, then thou shalt give life for life, eye for eye, tooth for tooth, hand for hand, foot for foot.

The big issue here is what the phrase “her fruit depart from her” means. Of course, abortion supporters point to the Bible translations that use the word “miscarriage” here. These translations include the Common English Bible, the Douay-Rheims, the Good News Translation, the Wycliffe, The Message, and the New Revised Standard. Honestly, not many well-known versions use the term “miscarriage.”

Many other translations – and most of the well-known, most trusted, and popular ones – use phrases like “she gives birth prematurely” or use similar words to the King James. These translations include the New International Version, the American Standard Version, the English Standard Version, GOD’S WORD Translation, the New American Standard, the New International Reader’s Version, and the New King James.

Take a look at the first part of the passage in the New King James:

If men fight, and hurt a woman with child, so that she gives birth prematurely, yet no harm follows, he shall surely be punished accordingly as the woman’s husband imposes on him; and he shall pay as the judges determine.

What matters even more than what the majority or the most trusted translations say is the actual breakdown of the Hebrew words used in the passage. The Hebrew word used for “depart” is not the Hebrew word used for miscarriage or abortion. Instead, it is the word used for an ordinary (and sometimes an untimely) birth. You can read a much more detailed analysis from multiple scholars and experts here. It’s actually short and easy to read, so I’d encourage you to take a look. Here’s the potent summary:

What, then, is the passage teaching? Simply this. If two fighting men injure a pregnant woman, causing her to give premature birth, yet no harm follows – to either mother or child – a fine will be levied as a penalty for such carelessness. However, if any harm followed, to mother or babe, justice was to be meted out commensurate with degree of damage. Both the mother and unborn child had equal protection under the law.